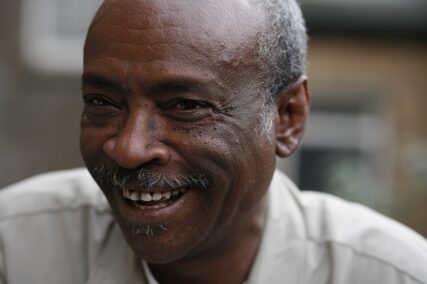 We were all deeply concerned to hear that the great Somali poet, Gaarriye, is seriously ill. As everyone who's read his indelible, powerful poems or had the great fortune to witness him in performance will attest, his is a unique talent, combining remarkable poetic skills with an outstanding ability to communicate with his audience.

Garriye has made an invaluable contribution to the work of the PTC. Thanks to Martin Orwin, he was one of the very first poets to be translated in the workshops set up by Sarah Maguire and his poetry featured in the PTC's launch reading at SOAS in June 2004, read in Somali by Gaarriye's friend and translator, Maxamed Xasan 'Alto'.

In 2005, Gaarriye was one of the six poets invited to take part in our first World Poets' Tour. His reading at The Brunei Gallery memorably featured 'the tallest man in the world', fellow Somali, Hussein Bissad.

In 2008, he returned for our second World Poets' Tour giving another series of remarkable performances.

We have published a dual-language chapbook of Gaarriye's poems, translated by W N Herbert, Martin Orwin and Maxamed Xasan 'Alto'; and you can download a full-length podcast of Gaarriye and Bill Herbert reading together.

This warm and moving event brought together Gaarriye's friends and translators, including Martin Orwin, Sarah Maguire and Bill Herbert. Bill read his wonderful translation, 'Arrogance' and he, Martin and Sarah spoke of the outstanding contribution Gaarriye's made to Somali culture and of his status as a leading world poet.