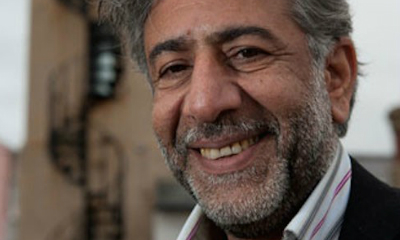 This workshop is sold out. Our upcoming workshop translating Arabic poet Amjad Nasser with Atef Alshaer is now fully booked. We are starting a waiting list so if you are still interested in coming to this session please get in touch by sending an email to bern@poetrytranslation.org.

Amjad Nasser is a pioneer amongst young poets of his generation who embraced the Arabic prose poem form in his second collection. He is is an important voice in Arab literature known for his work for the daily newspaper Al-Quds Al-Arabi, and his novel Land of No Rain (2013).

The Poetry Translation Centre started to translate his work with bridge translator Atef Alshaer last year. His prose poems have always been a delight to work on in our workshops. At a recent session, we translated ‘Stone’ a poem that came to life when we realised that in this Jordanian poet associated stones with a sunlit warmth and colourful, skin tones, rather than the cold, impersonal grey stones of Northern Europe.

This is a great workshop to attend if you speak Arabic or have an interest in Arabic Literature. Our collaborative translation process is a great way to gain a closer understanding of a language and its literary tradition.

Amjad Nasser is the pseudonym of Yahya Numeiri al-Naimat, a London-based Jordanian writer, journalist and poet and one of the pioneers of modern Arabic poetry and Arabic prose poem. Despite Nasser's left-wing political and ideological beliefs his poetry remained free from political slogans. His poetry emphasizes the celebration of daily life in detail, rather than raw politics.

Atef Alshaer is a Lecturer in Arabic Studies at the University of Westminster. He has a masters and PhD from the faculty of Languages and Cultures at SOAS, University of London and has taught there until 2014. Alshaer has written several research papers and monographs, including his book, Poetry and Politics in the Modern Arab World and an edited volume: Love and Poetry in the Middle East.

Edward Doegar is a poet, editor and critic based in London and the commissioning editor at the Poetry Translation Centre. His poems have appeared in various anthologies and journals, including Ten: The New Wave (Bloodaxe) and Granta. He is a consulting editor at The Rialto, a fellow of The Complete Worksand was general manager of the Poetry Society between 2013 and 2017. His pamphlet, For Now, was published by clinic in 2017.