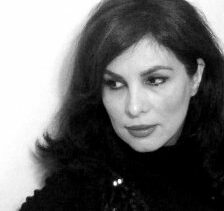 Azita Ghahreman, was born in Mashhad in 1962. One of Iran's leading poets, she has lived in Sweden since 2006. She is a member of the South Sweden Writers' Union.

She has published five collections of poetry: Eve's Songs (1991), Sculptures of Autumn (1995), Forgetfulness is a Simple Ritual (2002), The Suburb of Crows (2008), (a collection reflecting on her exile in Sweden that was published in both Swedish and Farsi), and Under Hypnosis in Dr Caligari's Cabinet (2012).

Her poems directly address questions of female desire and challenge the accepted position of women.

A collection of Azita's work was published in Swedish in 2009 alongside the work of Sohrab Rahimi and Christine Carlson. She has also translated a collection of poems by the American poet and cartoonist, Shel Silverstein, into Farsi, The Place Where the Sidewalk Ends (2000). And she has edited three volumes of poems by poets from Khorasan, the eastern province of Iran that borders Afghanistan and which has a rich and distinctive history.

Azita Ghahreman was one of the poets who took part in the PTC's Persian Poets' Tour. Her poetry is translated by Maura Dooley and Elhum Shakerifar.