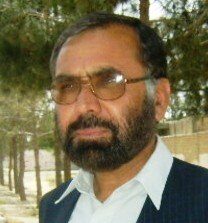 Professor Obaidullah Darwesh Durrani, commonly knows as Darwesh Durrani in the literary world, is one of the most famous contemporary Pashto poets. His family is originally from Kandahar in southern Afghanistan; they later settled in Quetta, Pakistan. He has a Masters degree in English literature, a subject he teaches to college students in Quetta. He has published eight poetry collections, most of which have won awards. He has also written prose.