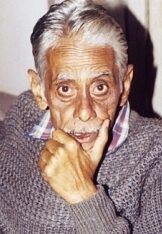 Born in 1932, Hiren Bhattacharjya is one of the most popular contemporary poets in Assam. His first poem was published in 1957. His first anthology of poems Mor Desh Mor Premor Kabita was published in 1972. Bibhinna Dinar Kabita (1974) Kabitar Rode (1976) and Tomar Gaan (1976) followed in what was perhaps his most prolific period. His most recent collection of poems is Saichar Pathar Manuh (collected poems 1991).

Ancient Gong is a collection of his poems in English while Jonaaki Mon O Anushanga is in Bengali.

Among his numerous public accolades are the Bishnu Rabha Award (1985) Soviet Desh Nehru Award (1987) and Sahitya Akademi Award (1992). Most recently he was honoured with the Assam Valley Literary Award for the year 2000.