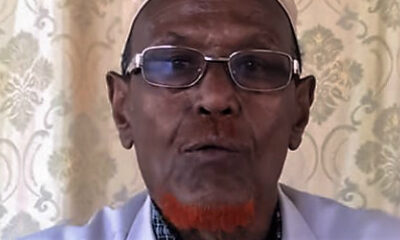 Maxamuud Maxamed Yaasiin “Dheeg” was born in 1945 in Lebi Sagaal settlement, Hargeysa District, North West Region of Somaliland. At the age of 18 he started reciting songs and poems. In 1967 he came to Mogadishu, the capital city of Somalia. In the same year he joined Radio Mogadishu Band of poets, playwrights, song writers and music composers.

In 1970 he left Somalia and went to Kenya, where he lived ten years. From 1980 till 1991 he lived and worked in the Gulf Arab States. In 1992 he came back home and settled in Hargeysa. He is a member of the House of Elders of Somaliland since 1992.

One of his most famous plays is “Advice and Step” of 1967. It is one of the so called “The Golden Era” of Somali plays. In it there are many songs which are still admired and treasured by many Somali speakers today.