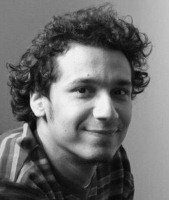 Born in 1986, Mostafa Ibrahim is considered one of Egypt's most exciting young poets and has been lauded by the country's two leading colloquial poets, Abdel-Rahman Al-Abnudi and the late Ahmed Fuad Negm.

His first collection of poems, Western Union, Haram, came out in January 2011 (just before the 'Arab Spring'). His second collection of poems, Manifesto (2013), sold out in less than six months. One of his poems about the martyrs of the revolution was adapted as a song and became very popular.