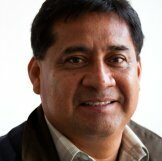 Víctor Terán is the most personal poet of the Zapotec Isthmus of Oaxaca, México. He was born in Juchitán de Zaragoza in 1958. His work has been published extensively in magazines and anthologies throughout Mexico. Since 2000, he has also appeared in anthologies in Italy and the United States (Reversible Monuments, Copper Canyon: 2002; Words of the True Peoples, U Texas P: 2005).

A three-time recipient of the national fellowship for writers of indigenous languages, his first book, Diixda; Xieeña (Barefoot Words) was republished in 1997 by Ediciones Bi'cu' Nisa. His books of poetry include Sica tiGubidxa Cubi (Like a New Sun; Editorial Diana: 1994) and Ca Guichi Xtí' Guendaranaxhii (The Spines of Love; Editorial Praxis: 2003). Terán works as a media education teacher at the secondary level, on the Oaxacan Isthmus.

In 2009 his poetry in translation has appeared or is forthcoming in Hayden's Ferry Review, Oxford Magazine, Poetry, and World Literature Today.