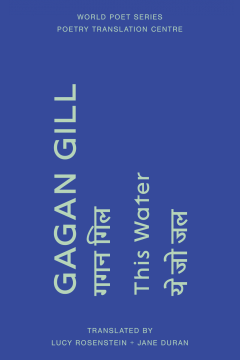 Gagan Gill is one of the most respected poets writing in Hindi today. Her poems give voice to the unheard – whether of a foetus or a bride, the abused earth or the animals upon it. This selection, featuring work from each of her five collections, demonstrates the musical and visual originality of her verse, which is constantly finding new expressive possibilities in simple everyday language.

With an afterword by Helen Charman.

Gagan Gill is a Hindi poet, essayist and travel writer. Alongside her five critically acclaimed collections of poetry, she has published three books of essays and a much-celebrated travelogue Awaak (Vani Prakashan; 2009) describing a pilgrimage to Kailash Mansarovar. She has held several of India’s most prominent positions in cultural journalism and was the literary editor of Times of India magazine Vama and the Sunday Observer. She was a visiting writer at the International Writing Program in Iowa in 1990 and the Nieman Fellow for journalism at Harvard University in 1992-93. However, after many years, she gave up her career in journalism in order to devote herself to poetry and its demands: ‘the long periods of silence in her everyday life’ that she considers vital to remain ‘truly connected to words’.

Lucy Rosenstein graduated in Indology from Sofia University and obtained her MA and PhD in Hindi at SOAS, University of London, where she was a Lecturer for 10 years. She has published two books and numerous articles on Hindi poetry. Since 2007, the main focus of her work has been child and adolescent mental health, but she continues to be nurtured by her deep connection with poetry.

Helen Charman is a writer and academic based in Glasgow. Her first book, Mother State, is forthcoming from Allen Lane. Her second pamphlet Daddy Poem (Spam Press; 2019) was shortlisted for the 2019 Ivan Juritz Prize; her latest, In the Pleasure Dairy, is published by Sad Press.

About the World Poet Series

Edited by the PTC's Commissioning Editor, the poet Edward Doegar, the World Poet Series offers a set of elegantly designed, 66-page, pocket-sized books which showcase the most exciting living poets from Africa, Asia and Latin America. The poems are presented in bilingual format across facing pages. The translations themselves bring together leading English language poets and translators.