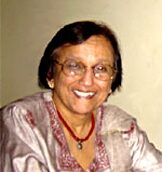 Bhadra Patel-Vadgama was born and educated in East Africa.She got her first arts degree at Makerere University Uganda and a Diploma in Education at Nairobi University Kenya. After working for six years in schools in Kenya as Deputy Head she emigrated to Britain in 1973.

In 1975 she got a postgraduate Diploma in Library & Information Science from the Polytechnic of North London. Her first job in Britain was with the School Library Services of the Inner London Education Authority where she worked for two years. In 1977 she became one of the first librarians appointed to develop library services for ethnic minorities in Wandsworth a multi-cultural inner London borough. In 1998 she won the Library Association’s Royal Charter Centenary Award for her contribution to the profession.

Although retired Bhadra still works as a freelance consultant and in 2001 was appointed Co-ordinator of ImaginAsian a partnership project between Brent Harrow and Hillingdon library authorities to develop reader-based activities to promote literature in the Indic languages and Indic writers in English.

In her spare time Bhadra is a translator writes articles and stories in Gujarati published in Britain and India. She loves Indian arts and travelling.