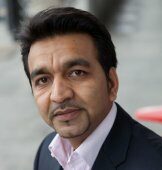 Hamid Kabir was born in Kabul. After finishing school, he won a scholarship to read Medicine at Moscow Medical Academy. In 1997 he settled in the UK to study International Business with German Language. He worked for HSBC Bank and two world-class software solutions companies before joining Ariana Travel Limited as the Chief Executive Officer. Alongside his main jobs, he also worked for various charitable projects and assumed the role of the Chairman of the Afghan Association of London in 2010/2011. Hamid has appeared in various TV and Radio programmes commenting on Afghan affairs, including Russia Today, BBC News 24, BBC Radio 4, Daily Politics and BBC Persian. Presently he is also the editor in chief of the only Afghan fortnightly newspaper published in London, Simorg.

With Nick Laird, Hamid translated the poems of the Afghan poet, Reza Mohammadi, for the PTC's Persian Poets' Tour.