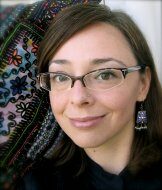 Zuzanna Olszewska is a Junior Research Fellow in Oriental Studies at St. John's College, Oxford. She received a doctorate in Social Anthropology from the University of Oxford, having completed a dissertation on 'Poetry and its Social Contexts Among Afghan Refugees in Iran', which won the Foundation for Iranian Studies' annual Dissertation Award in 2010. Her scholarly publications have appeared in a number of journals, including Iranian Studies and Anthropology of the Middle East, while her translations of Afghan poetry have appeared in print in the Norton anthology, Language for a New Century: Contemporary Poetry from the Middle East, Asia and Beyond and the magazine Modern Poetry in Translation; and on the internet in Words Without Borders, an online magazine of international literature. In her research, she continues to combine anthropological and literary approaches to Afghan poetry.