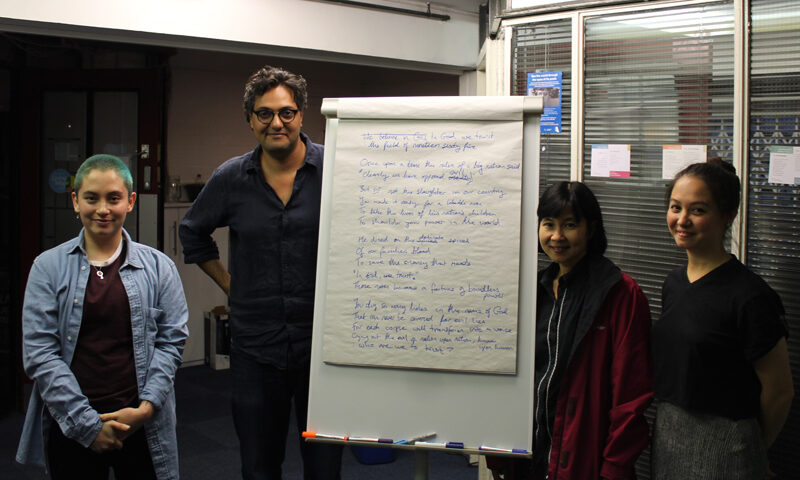 The three contemporary Indonesian poets that we have chosen to bring together for this recent series of workshops, Putu Oka Sukanta, Shinta Miranda, and Norman Eriksson Pasaribu, all appear, at first glance, very different. They each come from a different generation – Putu Oka Sukanta was born in 1939, Shinta Miranda in 1955 and Norman in 1990 – and yet they share an urgency of expression and an outsider’s perspective, which has brought each of them prominence in contemporary Indonesian poetic opinion.

Putu Oka was born in Singaraja in Bali, and started writing as a teenager. His first novel about the struggle of a group of fishermen in challenging the Japanese colonial government, entitled Buruan [Fugitive], was published in 1964. In early October 1965, the hunt for left-wing and communist people began in Indonesia. Aided by the CIA during the Cold War, the Indonesian military massacred millions communists and alleged communists (the number is not clear) and imprisoned millions of others without trial. These incidents were later known as the 1965 genocide. Because of his involvement in the left-wing literary and social movement Lekra, Putu was imprisoned from 1966 until 1976 in Salemba, Tangerang, and was severely tortured. On his release, Putu resumed writing while practicing acupuncture to make a living. However, Putu was constantly observed by the Indonesian authorities and in 1990 he was imprisoned again without trial for 10 days. He was also beaten and tortured for having been suspected of spreading communism. Writing is one of the ways Putu Oka conquers his anger about the injustice he has experienced.

While full of sorrow, his writings are not fiery or explosive; instead there is a sense of calmness. The words ‘tears’ (air mata) and ‘guns’ (bedil, senapan) appear several times in his poems, not as outbursts of emotion but rather as a burden he has to carry. Like Sisyphus, Putu Oka keeps rolling this huge stone, right to the top of the mountain so that people can see how heavy, powerful and horrific that stone is. Yet that rock falls to the bottom again and again, and Putu has to keep pushing it back up. He does not give up. From one decade to the next, from one political era to another, the themes of Putu’s poems are consistent: injustice and persecution.

The poetry of Putu Oka is a journey of different types of oppressions, suffered by various groups of people. With every step uphill and down, the rock carries with it dust and debris, which are different every time. The rock is never the same. Thus, although the styles and themes are similar, we encounter different journeys in Putu’s poems: stories of various labourers, political prisoners or persecuted artists.

Misery and suffering also suffuse Shinta Miranda’s writings. As in Putu’s work, the theme of the 1965 genocide in Indonesia keeps appearing in her poems. Indeed, Shinta Miranda’s father was imprisoned in 1966 in Salemba, Jakarta because he was a journalist who had been employed in East Germany. Shinta’s mother, a lecturer of English Literature at a University in Jakarta, was also detained for one week and lost her job. Later, Shinta’s mother decided to take up a scholarship in Edinburgh. Shinta’s father passed away not long after his release. Thus, left by both parents, Shinta Miranda had to earn her own living at the age of 15 by working as a bar-hostess, a job which required her to provide sex to some of her customers.

After Shinta was married, she began writing short stories and poetry. However, her husband required her to dedicate her life to the church. He tricked her by demanding that all of her writings be sent to potential publishers or media outlets by his assistant; in fact, they were only ever sent to the church journal. Because Shinta Miranda is only a high-school graduate and had difficulty finding a good job, she relied on her husband financially and did not have the confidence to challenge him, even when he physically and mentally abused her.

It is no surprise that after her husband died, Shinta’s poems became full of explosive challenges to the patriarchal society in Indonesia. Several of her poems later appeared in various anthologies. In 2011, Shinta published her first collection of poetry entitled Constance, which reflects her life as an orphan, having lost her parents as well as successive parental figures. After her father and mother had to be taken away from her home, she was later also betrayed by her husband. As a pious believer, she faced the suffering of an unresponsive God; many of her poems read like prayers to a deaf, cruel and arrogant God. Gone is the benevolent Almighty whom she used to praise in her Catholic church.

Catholicism also has a strong influence on Norman Pasaribu’s poetry. His first collection of poetry, Sergius Mencari Bacchus [Sergius Seeks Bacchus] was published in 2016 by Gramedia and translated into English in 2018 by Tiffany Tsao, and won a PEN Translates Award in the same year. Norman’s use of Catholic saints’ texts or quotes to portray queerness, renders him as part of the long tradition of queer Catholic writings.

Unlike Putu and Shinta, whose styles are somewhat traditional, Norman’s poems often experiment dramatically with poetic form. The lines and columns of his poems are at times branching. Where most Indonesian poems appear in a single column of narrative sense, Norman’s poems often subvert our readerly expectations, forcing us to read across broken lines and make sense of them anew. Nothing is simply one way, just like the gender and sexual orientations that he portrays: transgression is always possible.

As a Bataknese and Christian queer growing up in Bekasi (West Java), Norman experienced seclusion from mainstream Indonesian society. It is no surprise that Norman often challenges heteronormativity and questions religion in his writings. Tales of unrequited love and of seclusion dominate his poetry. As he himself admitted in one of the interviews, he uses ‘poetry to experiment’ and to ‘resist convention’.

This spirit of resistance, differently employed by each of the poets, seems to unify them from the disparate perspectives on the outer edges of Indonesian society. Writing poetry provides them with a vessel to express themselves, to be heard, to be accepted, to be known, and to know each other. Indeed, loneliness is never alone.