Translator Natalia Bukia-Peters looks back at our Georgian Poets Tour. 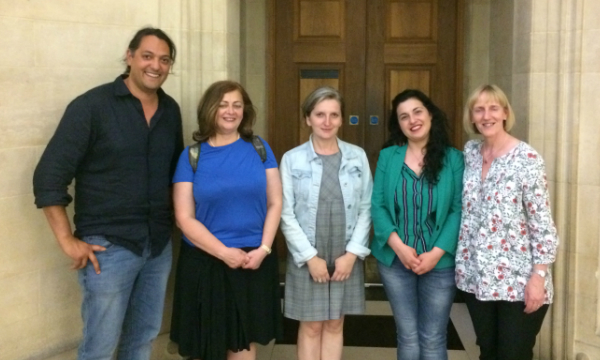 I was first introduced to the Poetry Translation centre by my poet friend Vicky Field in 2012.  I immediately was fascinated by the process of translating as part of the group of poets, translators and people who just loved poetry and languages.  Sarah McGuire was an artistic director of the centre then, and she led the workshop. After that, each year I was privileged to bring a Georgian poem and work on it at the workshop.  I wanted Georgian women poets to become better known.

Georgia is not a big country, but we have a great language and the opportunity of introducing our poetry at the PTC was immediately seized upon by me.  Later, Sarah had a great idea to translate in parallel a Georgian, Diana Anphimiadi’s, and a Turkish Armenian poet’s poetry in parallel, consequently intending to organise a tour around the UK.  Unfortunately, it did not happen due to dear Sarah’s untimely death. However, our new director Erica quickly picked up the idea and it really happened: Our Georgian poets Diana Anphimiadi and Salome Benidz chose the English poets from the list Erica provided. Our English poets were Jean Sprackland and Helen Mort.  I was a literary, a so-called a ‘bridge’ translator. That was a big privilege and even bigger responsibility to be the point of connection between the fabulous, acclaimed poets of my two favourite countries - Georgia and the UK.

Throughout the winter and beginning of spring, all the poets, poet-translators, organisers and at a later stage our wonderful editor Ed, exchanged hundreds of emails and endless telephone calls.  Due to our different geographical locations, that was our way of communicating. Once we completed our creative part, in other words our translation, editing, last minute changes, the printing of the very beautiful chapbooks, an administrative phase began with a number of issues: visas, logistics, accommodation.  Everything was perfectly organised. However, there were some problems with visas independently from any organisation from our side.

The Georgian poets arrived, Salome was immediately whisked to Glasgow, while I met Jean and Ed for the first time at the railway station to travel to Norwich. There was a lot of ‘travelling together’ later: Bristol, Manchester, London and finely Falmouth in Cornwall where I live.  Wherever we went we had a very warm welcome. It was fascinating to see all the emotions and interest on the readers’ faces.

On the final day in London, Bern arranged a recording our poets reading their poems in Georgian and then the translated poems respectively.  Bern was outstanding in his organisation that day. Later he posted many podcasts and pictures of our tour on the PTC website and Facebook page.

Every day of our tour was full of events and emotions.  Apart from creative work which had been perfectly fulfilled and resulted in two fantastic chapbooks, we all became friends.  What can be better than to meet and to make friends with people you share so many interests with and above all an interest in POETRY.