An Interview with Gaarriye published in The Wolf 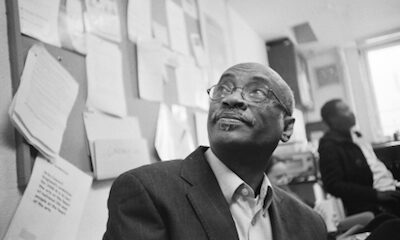 You have just been involved in the Poetry Translation Centre's 'World Poets' Tour'. How has it been to visit England and read your poetry to audiences over here?

It was good in the sense that it gave my poetry the chance of an international exposure that it needed. Also it was the first time that English audiences were able to listen to my poems; and probably any poetry from Somalia which was very important.

You were translated by one of our finest contemporary poets David Harsent who worked closely alongside Martin Orwin and Alto Xassan. Having a good command of English how did you feel about the translations?

To have a man of David's profile working on the translations was great. It was a privilege reading with him on the tour. David was able to keep the spirit of my poems which is often what first goes missing in translation.

The importance of written poetry in Somalia has grown since the emergence of poets like Hadraawi and yourself in the late '70's. Is Somalia beginning to lose some of its poetic traditions or is the importance of poetry as an oral literature significant as ever?

So far Somali hasn't lost its oral tradition. Somalia was first properly written down in 1972 but it is still more of an oral language and there are still no dictionaries. Somali poetry relies very much on being passed on orally by its people via reciting poetry in their communities and recordings on cassettes. Little of this has changed despite some improvements in technology.

In Somalia poetry readings are known to attract hundreds often thousands from the local community. How does it compare with reading to smaller numbers in places like Ilkley and Cardiff?

The experiences are very different. The people who came to places like Ilkley were more English academics than Somalis. It was strange not reading to so many of my own people. But the London reading (at The Brunei Gallery) had over 100 Somalis. As you say I'm used to big crowds at poetry readings in Somalia. To have so many people in the audience helps me to express myself.

What has your impression of English poetry been while you have visited here?

I discovered soon after I arrived here that if you think of English poetry and Somali there are massive differences in what seems to be expected from the poets. These are differences of responsibility. In Somalia the people have a high level of expectation from me as a poet and I as a poet have a responsibility to them. In England it seems that very little is expected from the poet.

The English poet doesn't seem to be writing for the people but instead he is writing for himself.

This could be why not many people seem to be interested in English poetry anymore. This is just my impression of course but in Somalia for example I wouldn't be able to get away with writing a poem about a bottle or a flower.

If I were to stand up and read a poem to thousands on this kind of subject in Somalia no-one would understand why I was talking about this in my poetry. Nobody would care. However I have read poems (with Martin) in English and have been able to understand that they are good poems within the literature and culture of England. Yet the problems would be that if translated into Somali the subject of the poem would not make much sense.

You've mentioned to me before how chewing qat leaves is crucial in charging your creative energies. Is qat the drug of choice for poets throughout Somalia?

Some people need a glass of wine or a good meal but for me it's qat! It gives me the kick that I need. I've never written a poem without taking it. I'm not sure if other people are taking it to be creative. I can only speak for myself on this.

During your learning as a poet did you have any access to western poetry?

Not much really. Some Shakespeare and Keats. T.S. Eliot more recently. Obviously it's mainly Arabic literature that we have access to as it's the language that is much closer to our country. There is such a wealth of poetry in the Arab world and new poets coming through all the time. It's hard to keep up and read it all. But there were some of Shakespeare's plays had an influence on me. I once remember playing Hamlet in a play at school in Hargeysa!

Somalis are undoubtedly real connoisseurs when it comes to knowing their own poets. As a leading poet in Somalia does this make you take your role as a voice to the people more seriously?

More than that it makes me take my role more seriously as a human being. In Hargeysa I cannot behave how I like. Also I am surrounded by people who see me as a role model so I have a duty to behave in a certain way. I have to be cautious of what I say because in Somalia people want to know what I have to say. I cannot drink or take drugs in public because the people would be offended. It's like what you would call 'celebrity- status' over here.

I've heard stories of Somalis who claim to be poets just to get some attention. Is it easy to spot a fake?

Yes. The people would find them out quickly.

What makes a poem memorable?

The position that the poet takes and the texture of his poem.

Your long poem about Nelson Mandela (written on his 60th birthday) goes far beyond Mandela and becomes a comment on humanity. It's almost as if Mandela is speaking through you in the poem. Was this intentional?

News of your readings over here spread like wildfire among the Somali community, many of whom would be living in exile here and many who may not have seen you read live. How significant was it for you to read among many of your own people who have fought so hard for their own personal freedom?

It was very special for me. Seeing how so many Somalis came to hear me read over here gave me such a lift in the readings. I could see from them how much it meant to have one of their own poets here. I could see it in their faces in their eyes. Although I enjoyed everything about the World Poets' Tour this is the most important memory that I will take home.

Did London inspire you and are there any poems in the pipeline about your visit here?

I was not able to write poems while I was here but this trip will definitely stay in my mind. London is the city of the world. It is a special place.