An overview of community feminisms in Latin America 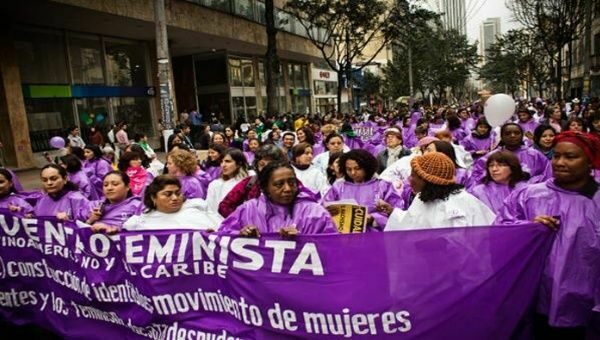 The word contagion usually has negative connotations -even more since COVID- and in my experience as a queer feminist activist in Nicaragua it was often used by machista men to warn about the danger of associating with people “like us”. But among movement feminists it took on another more playful double meaning: the positive mutual contagion of “dangerous” critical feminist politics and dissident sexualities. As we all know contagion knows no borders and spreads like wildfire with intermingling and close contact between people. Similarly, where there are conditions for political intimacy, uncomfortable, new and/or surprising ideas can take root in the differentiated experiences of our collective bodies/minds/souls, displacing old habits and producing multiple manifestations and interpretations. But here there is always a caveat, as we know only too well in Nicaragua: regardless of the political ideas that are apparently being professed, political contagion can also be highly problematic, if not fascistic, when based on single story mythologies, top down coercion into sameness, or discursive appropriations that ultimately sustain the apparatus of oppressive power relations.

Feminist movement in Latin America (i.e. that moves rather than being a “thing”) has benefited from a liberational spirit of contagion beyond the above caveats, thanks to its plurality of practice and discourse, and especially the capacity for radical reflection and reflexivity. And by the way, by radical I mean unearthing the roots of intersecting systemic oppressions and by reflexivity I refer to conscious and intuitive self-reflection.

This contagion has taken place over decades of continent-wide networking and gatherings, as feminists find ways to travel physically and/or connect virtually across colonially imposed national and linguistic borders to exchange their experiences and thinking. From its inception in 1981 in Colombia, the Latin American and Caribbean Encounter (EFLAC), provided a serial meeting ground of major importance every two to three years. These joyful and often tumultuous encounters have brought together a complex web of mutually contesting feminisms that might be loosely grouped around three sites, albeit with porous or blurred limits between them. The first site might be broadly defined as horizontal and autonomous initiatives for action including alternative media and arts groups, organisations grounded in communities with a wide range of specific feminist identities, thematic campaigns and/or specific geographical areas. These collectivities, which may or may not have legal status depending on their circumstances, are frequently connected with a variety of new social movements on the continent such as the afro-descendent and indigenous movements, youth and student movements, community initiatives for solidarity economies, ecological and eco-agricultural movements, anti-capitalism and opposition to mining, water and land grabs and other mega-projects, and movements demanding respect for human and civil rights. The second site consists of spaces of academic research, learning and theoretical distillation, within which feminists often, but not always, have ties to the aforementioned initiatives. The third site is that of local service based NGOs and larger national and international scale NGOs, state institutions or development agencies, which work within the limits of legal structures and funding logics, while often participating in feminist spaces where they are located.

Over time, the gathering space of EFLAC has grown to be contentious as critiques have emerged of the way international donors from the western north began to de-politicise continental feminist agendas, and influence feminist political culture through the service-based hierarchies of NGOs. Feminists with key critical voices from across the continent have said they feel it no longer serves its original purpose as a collective political vehicle through which to deepen strategic discussions, strengthen points of consensus and contribute to joint declarations and action.

Growing from/parallel to, and beyond the EFLAC encounters, autonomous and community feminists across the continent have sustained and consolidated spaces over four decades to network and share practices and critical theorising. Over the last period these spaces have produced a rich plurality of decolonising proposals that challenge the reproduction of white/universalist feminist assumptions within the movement. At the same time, these proposals have been taken by feminists into wider political, social and academic arenas to question colonising racist, patriarchal, and heteronormative epistemologies and pedagogies, the violence of institutionalised hierarchies of political power and the destructive force of extractivist globalisation as an economic system.

Feminist movement writers and academic-activists such as Rita Segato, Silvia Rivera Cusicanqui, Sueli Carneiro, Ochy Curiel, Breny Mendoza, Karina Ochoa, Yuderkys Espinosa, Lorena Cabnal, Emma Delfina Chirix, Aura Cumes, and Luiza Bairros to mention just a few, are publishing their individual thinking while also engaging in circulating collective publications in print and online, mostly in Spanish and Portuguese. Few of these are available in English translation. Not surprisingly, while feminist writing in English have access to translation into a variety of languages, translation and publishing efforts in the opposite direction are minimal in comparison. When translation and publishing are available it often comes at a cost: the decolonising ideas of feminists from around the world are exposed to displacement and appropriation, sometimes without authorial credit and all too often reduced to theory placed in the realm of the abstract rather than movement-based critical praxis.

This means that celebrating and sharing the rich body of work by Latin American and Caribbean feminists writing about decolonising implies a responsibility to think critically about how we using it and with whom. It requires us to problematise and reflect on the work of translating languages and knowledges across distinct political contexts into the multiple realities we inhabit in the English-speaking world. These texts challenge intellectual extractivism and demand radically reflexive approaches that feed into work to decolonise our own spaces for learning and collective action wherever we may be located.

Helen Dixon (she/they) is a british-nicaraguan queer feminist activist, academic and published writer/poet and translator. As part of the PTC's Radical Approches Reading Group they will be facilitating four workshops, as a co-participant among peers, to celebrate and explore decolonising and community feminist theory and methodologies from Latin America.