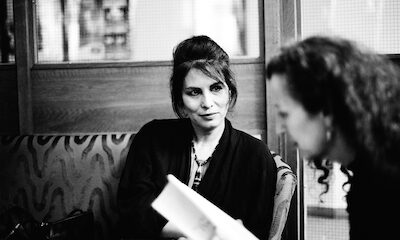 I first spoke with Azita a week after I agreed to undertake this work, and discussed possible poems to translate. She gave me free rein to choose from her website and another Persian website (www.rendaan.com) the poems that I felt would translate best into English. There was a lot of back and forth at this stage, as Azita was keen to include some of her newer work, but there were some poems I didn’t feel would work very well in English. We finally settled on 6 poems, including two longer and newer poems.

Translation into English: I delivered all the literal translations to Maura by mid December, with the plan to work through them together over the Christmas break. I sent several types of documents: a word document for each poem with a word for word breakdown, a line by line literal translation, and notes for any expressions, hidden meanings and other things to take note of (e.g alliteration in Persian), as well as copies of the Persian texts so that she could visualise them.

After Maura had worked on them a little, we spoke at length (on the phone) several times about all the poems and met once in early January to look at the first stage of the English poetry translations. During this time, I also began working with Azita to unpick the subtler meanings, and sometimes the implications of specific images. From January to March, Maura, Azita and I would speak at least twice a week about different poems.

I should note that some of Azita’s poetry is also quite challenging to understand for a Persian speaking audience – although the inherent mood and rhythm of poetry can allow you to forgive and gloss over the fact that sometimes expressions or images doesn’t make complete logical sense. For the translations, however, all three of us felt it was important to give some additional pointers to the English speaking audience, so that they can understand at least one of the layered meanings – whether cultural or personal – and so that misunderstandings were not thought to be a product of the translation. Azita, who is currently also translating all her work into Swedish with a Swedish translator, told me that she was aware of the difficulty her work poses for translators, as every single word can have a hidden meaning.

At this stage, Maura and I decided to change some of the initial choices made, and swap one of the newer and longer poems for two shorter poems that referenced the theme of exile, which up till now hadn’t been valorised through the choice of poems – 'When Winter Comes' and 'The Boat That Brought Me'. Azita wasn’t very pleased with this decision at first, as they have already been translated elsewhere, but in the end, she thinks that 'When Winter Comes' is one of the strongest translations of all, so she’s happy with the choice.

Final translation stages: Azita was very helpful to work with, and as the poems got closer and closer to their final translations, she made time to read, and speak to me about them all. She was happy for certain elements to be changed to make more sense for an English speaking audience (e.g. the poppy in with a red flower, which could have been translated as simply ‘flower’ or ‘rose’ but we chose to make closer to the meaningful red flowers in English) and was very happy to feel that a real sense of musicality had been carried across in Maura’s writing.

Working with Maura was a wonderful experience, she uses simple and precise words and wonderful attention to detail. I cannot imagine how complex it must have been to be faced with the first literal translations, and I feel that she brought a lot out of the poems. I am very pleased with the final choice of poems and their translations.