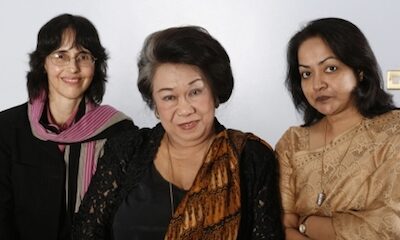 I stepped out of the rain last night at SOAS to find the world in a basement. A muffled jangling of drums and gamelans from a practise session rose up the stairs as I went down towards an underground lecture theatre where a multi-lingual crowd was gathering for the latest leg of the inaugural World Poets' Tour.

Created by the Poetry Translation Centre at SOAS, the World Poets' Tour is taking poets from six countries and their translators around Britain, introducing new voices to English poetry, and providing a chance for the poets and translators to meet for the first time.

"Poetry only changes through translation," says the director of the Poetry Translation Centre, Sarah Maguire. "Chaucer translated the Romance of the Rose, Sydney and Wyatt translated Petrach. Think of Pope's Iliad and Pound's Cathay ... I could go on and on."

First up last night was Indonesian poet Toeti Heraty and her translator Carole Satyamurti. Heraty stands calmly by, a flash of silver grey in her dark black hair, as she is introduced as a writer, editor and professor of philosophy at the University of Indonesia in Jakarta, then jokes that she is glad of the introduction - the purple backdrop which dominates the stage lists the writers in reverse order, and we might have thought she was someone else.

She begins with a poem that describes two women who fell in love with the same man, but just as she launches into the first line Satyamurti stops her - "I think people will appreciate your poem more if they have already heard the English version," she says.

Next Jane Duran introduces Gagan Gill, a poet from Delhi who writes in Hindi. They begin with two lamentations. Again the English versions are presented first, Duran holding onto her papers with both hands, Gill measuring out the dense repetitions of her poetry carefully with little movements of her right hand. The microphones are set at either side of the stage, so far apart that if the poets were to keel over towards each other and stretch out their hands across the purple divide their fingers would not touch. Duran shifts her weight onto one leg and juts out a hip for the wry humour of the prose poem Every Love.

After the interval it has been decided that the Mexican poet Coral Bracho's originals will go first, preceding Katherine Pierpoint's English versions. Bracho nods and gives a little smile across the stage as each one comes to an end. She grasps and stirs the air as she tries to explain a poem which captures the ebb and flow of water, then bobs and sways in the eddies of it as she reads.

I ask Katherine Pierpoint how she has found the process. She is quick to stress the help she had from Dr Tom Boll, who gave her literal translations of the Spanish originals. "This three-way process of working in a team has been particularly rewarding," she says, though she did sometimes have doubts about the project. "There are times when you ask yourself whether you're just translating the content of the poem and not the value."

She sees the role of a translator as conveying the essence of an original. "It's Coral's party," she says, "you're just there as a channel." Perhaps this puts a subconscious restraint on her performance. "Normally I'm a terrible swayer," she says.

The World Poets' Tour is at SOAS again tonight, and then continues in Ilkley, Cardiff, Derby and Edinburgh.

This article was originally published on the Guardian Culture Vulture blog. Find out more about the author Richard Lea.