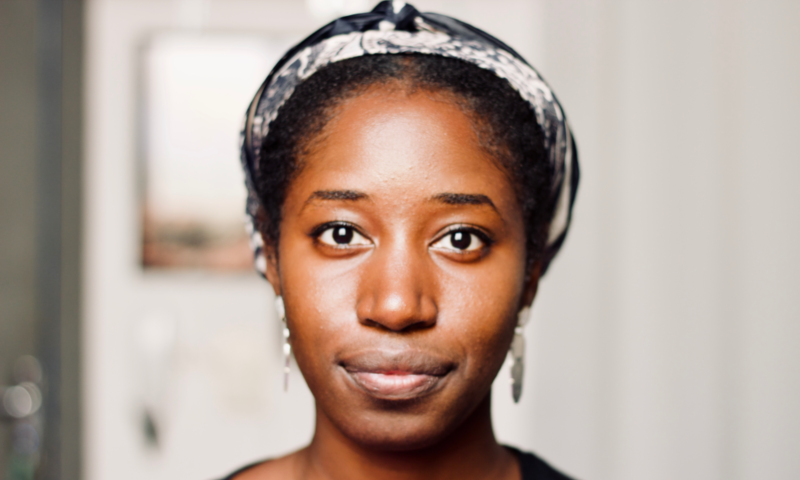 Victoria Adukwei Bulley is a poet, writer and filmmaker whose work has appeared widely in journals including The Poetry Review, in addition to BBC Radio 4 Woman’s Hour. She is an Eric Gregory Award winner and has held artist residencies in London, the USA and Brazil. Victoria is the director of MOTHER TONGUES, a poetry, film and translation project supported by Arts Council England and Autograph and a member of the PTC Advisory Board.

Could you explain a bit about your wonderful project MOTHER TONGUES?

The back-story to MOTHER TONGUES is that I’m the last of four children and my parents came over to London from Ghana in the early 70s. My parents are from the same town, they speak the same language but they made a choice not to speak their language to us. In Ghana there are many, many languages, my parents are from Accra, real old school Accra, the part with the most colonial influence. They’re from that Jamestown area and the main language that is spoken there is Ga. In Ghana, this language is typical of the capital but it is not the majority language in the country so there’s a way in which the language is withering a bit because people are learning to speak the more dominant languages or English.

MOTHER TONGUES basically started with my mum. We were watching TV one evening and there was a woman singing in Ga. I asked my mum to translate that woman’s song into English. As my mum was doing this I was thinking “oh, maybe we could do the same thing with poetry”. I thought if I’m a poet and I write, maybe I could ask my mum to translate some of my work into Ga and maybe I could get a sense of how the language works through knowing what I’d written. There are quite a few of us in this position where maybe we speak our parent’s languages or maybe we don’t but either way we don’t live in those languages as much as our parents did.

So I thought, make this a project and make it visual because I quite like the idea of using film and bring in a couple of other poets who are familiar with this experience of having that distance from a mother language. I’m really into the film and visual side of things because creating something holistic through text, sound and something visual appeals to me.

On a recent trip to Ghana, I was thinking a lot about MOTHER TONGUES because when I completed the project I went to Ghana soon afterwards in 2017 and got to share the films at a festival in Accra. That was the first time I had taken my work to Ghana as I hadn’t been for seven years before that point. I felt like I was coming there as an adult with my own sense of what I wanted to engage with and to connect with. I still have that attitude now when I go there, “what’s the next thing that I’m going to do here that makes it a part of my work?”

Thinking of MOTHER TONGUES, I was particularly struck by the bit in your report on the project for the Poetry Society where you say ‘I don’t have enough fingers – and possibly not even enough toes – to count the individuals I know who do not speak the language of their parents.’

This is the thing, you make a project for yourself – when I say ‘make for yourself’ it doesn’t mean that you make stuff selfishly, it means that you make stuff because you have identified a need in yourself to make something that doesn’t exist. It just so happens that there will be other people that feel that way and then a community begins. For me, one of the best things that came of MOTHER TONGUES were all the people that reached out to me to tell me “this is really good! We needed this”. One of those examples were PTC coming and asking me to join the advisory board, I may have always wanted to do something where I could be in conversation with an organisation like this but I had to declare my interest in the topic in my own way before the connection was made. Often people are just trying to find each other and I think people are looking for you but you wouldn’t know.

Could you tell us a little about your residency at the V&A ‘Unfortunate Inheritances’ and, perhaps, if you think poetry in translation can play a part in unearthing lost histories?

That residency was really interesting because it was only meant to be three months. My role was to come in and look at archival material and also histories within the collection that connected some of the owners of those items of legacies of absentee slave ownership in the Caribbean. For example, there were a whole load of exhibits which were bequeathed or sold to the museum by people who owned hundreds of people in Jamaica or Barbados or other places. These were often ridiculously rich people and often also women. My response to that was to work with an academic whose research was based around that history and try to write in response. I also created a series of short films and photographic portraits.

Languages aren’t just about concrete things such as the word that you use for a chair, or for food or a plant. They’re also about names. Names have a place within languages, so when I was looking through the registers of enslaved people in former British colonies in the Caribbean I found it really interesting to see names of enslaved children or adults which were names that I knew from Ghana. For me, that was a really beautiful connection...and sad as well.

On those registers you would have a name and then an age, and either the word African or Creole. If it said African it meant that person was captured in West Africa and they came across on the boat. If it said Creole that meant the person was born in Jamaica, Barbados or anywhere else in the New World.

You would often find that you had so many Creole individuals with African names. I found that really touching because it meant that if I saw the name Kwadjo (a name from Accra), not only did that mean that the person was of a descent that I share, it means that the person wasn’t born there but that their mother named them as some sort of homage to the place that they came from. Once you were in that position, you didn’t have a decision over whether you had children or not. All you could give your child was a name from a community that you can’t get back to and you may never see again.

Do you think arts organisations could do more to reach out to existing diaspora communities, such as the Ghanaian community in Tottenham, and if so, how?

If you are trying to reach a community you need to figure out what that community needs: what does that community want that you could support. For example, I know that there are different places where you can go to learn certain Ghanaian languages but they’re part of small community based initiatives projects. I’d be interested to see whether somewhere in the teaching of those lessons if there could be organisations such as PTC looking out for poets who have that heritage and who are writing from that heritage.

A lot of people could enjoy poetry but that doesn’t mean it has to have the place in their life that it has in mine. If you know poets from a community whom you want to connect with, it’s a matter of finding those poets and reaching out to them as someone who is closer to this community to help with facilitating that connection.

I feel like there’s a balance in what I find myself writing. I am writing what I know or what I want to know. If it is what I know then it will be something that I have come to realise. If it is something that I want to know then it usually stems from a loss of knowledge. It’s a gap. It’s always one or the other. Every poem is either a prayer or an answer. Whether or not you feel that you are writing about yourself…you’re always writing about yourself because you are writing about that thing or that person through yourself. There’s no escaping it.

I had a really good time in September last year for a British Council funded experience with Modern Poetry in Translation with Clare Pollard. That was amazing. First of all, I love Arabic, as a language with all of these different versions wherever it is spoken, but I also loved the process of speaking to bridge-translators and then speaking to the poets having read the bridge-translation. I learnt a lot about myself on that trip. I think if there’s one thing I’m good at, it’s that I am very good at getting what people mean. I’ve always been the person in my family if there’s an argument or dispute who will say “no that’s not what they’re saying, they’re saying this!”. I think with translation the way that someone’s voice sounds can deliver meaning. There would be times where I would be speaking to the poet (I worked with two poets: one from Tunisia and one from Algeria) and then I’d realise “oh I don’t think that’s what she means”. So I would change what the bridge-translator wrote to fit what she meant. Having the poet there is a really beautiful opportunity.

For me, it cemented that I always want to work with translation because poetry is one thing but translating is such a different brain. I love the feeling of finding the right word, moving words around my head like a puzzle and discovering that this word is the one. All words are not equal, they’re really not.