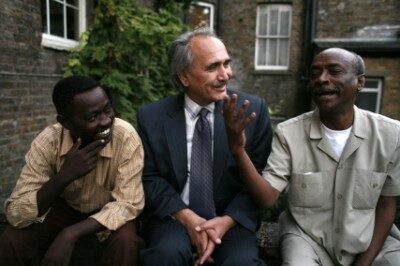 The three-week ‘World Poets’ Tour’, which has been taking place this month, is the first tour of its kind in the UK. The tour was organised by the Poetry Translation Centre (PTC) of the School of Oriental and African Studies (SOAS), London University. It has visited ten cities in England, Scotland and Wales and ends tomorrow with a reading in Edinburgh, Scotland, by Al-Saddiq Al-Raddi of Sudan and Partaw Naderi of Afghanistan.

A reading held in the Brunei Gallery at SOAS a few evenings ago featured Al-Raddi and Naderi together with Maxamed Xaashi Dhamac ‘Gaarriye’ from Somaliland. The other poets brought to Britain for the tour are women: Coral Bracho from Mexico, Gagan Gill from India and Toeti Heraty from Indonesia.

The tour by the six poets is striking evidence of the PTC’s valuable work in making the work of non-European poets accessible to an English-reading audience through high-quality translations.

The PTC was launched last year, and its founder and director is poet Sarah Maguire. Poems are translated literally by a first translator. The translations are then transformed through workshops into poems that ‘work’ in English while remaining true to the originals. A number of eminent poets in Britain have translated PTC poets, and the tour included six of these poet-translators, among them Maguire herself.

At the Brunei Gallery evening, Al-Raddi’s work was read by him in Arabic and by his poet-translator Mark Ford in English translation. His work has also been translated by Maguire, who is the translator of Nadari’s poetry and appeared on stage with the Afghan poet.

David Harsent, who read alongside Gaarriye as his poet-translator, this month won the prestigious Forward prize for the best poetry collection for his collection “Legion”. Gaarriye’s work was introduced by Dr Martin Orwin, SOAS lecturer in Somali and Amharic, who explained that Gaarriye was “the first person to work out how the Somali metrical system works.”

Maguire told the audience that she was particularly delighted to welcome poets “from three regions of the world which have been very troubled and which have suffered, and are suffering, enormously. All of those countries have very long histories with Britain and with British meddling in their affairs which British people like me feel deep regret for.”

Maguire noted that people from the Sudanese, Somali and Afghan communities, who have fled terrible conditions, are often made to feel unwelcome in Britain. “I feel again an enormous sense of regret about that because, as far as I’m concerned, the best thing about living in London is the fact that there are 300 languages spoken here and there are more and more people coming to live here from countries such as your own.” The evening gave “the opportunity to indicate to people a glimpse of the extraordinarily rich literary heritage and traditions of poetry of the three countries.”

The audience reacted to the readings with obvious enjoyment and enthusiasm. Gaarriye’s performance gained an extra dimension when he invited “the tallest man in the world”, fellow Somali Hussein Bissad, to join him. Hussein, who is eight feet one inch tall, stood on stage throughout Gaarriye’s readings.