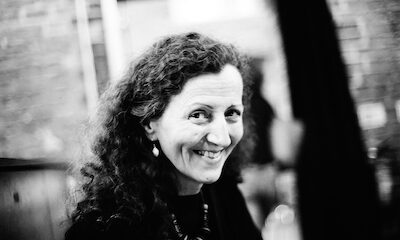 I was excited to be asked to work on some translations for the PTC. From my own reading, over the years and in past work as a poetry events organiser, I know that the value of translation is inestimable. Yet only once before had I worked on a group of translations for publication and that had proved a disaster, when the literal translator turned out to be so fine a writer that there was nothing left for me to do and the project imploded. In the past when I had translated poems from the French and from the Dutch, just for fun, my schoolgirl Latin, German and French helped me find a way in. It meant that I understood the shape of the sentence and had a cultural familiarity with the author’s intentions. But when I first saw Azita’s work in Farsi, it was simply a beautiful pattern on paper. Finding her on YouTube was a great moment. Hearing those musical cadences and, more particularly, the tone of some of the poems, helped me build a sense of mood and intention. Elhum Shakerifar proved to be the vital bridge in her role as literal translator. She supplied word for word translations, with variants, of each line. Though as you’ll see here, these did not always immediately take the matter of understanding much further!

when one persuades the expert, long and blind tunnels are dug behind short words.

Those two lines are a typical example of the basic form Elhum supplied to me. Onto this we built a huge three way conversation, interrupted by my many drafts, naive questions and reworkings.

The above finally became:

we find significance everywhere we look (The First Rains of Spring)

Elhum’s approach provided a meticulously prepared seedbed. She responded to every question of mine, ‘but could this also mean..?’/’but what about the earlier use of…?’/’but does this have any significance in Persian culture…?’/’But is this a political reference…?’ with detailed responses, double-checking everything with Azita. Furthermore she is a sensitive and nuanced interpreter – questioning and thorough. I could not have been luckier than in my partnership with Elhum.

One of the most interesting dilemmas for me, in creating a version of work from a living poet, whom I was to meet , came from Azita’s responses to some of the questions I asked. Often Azita would reply along the lines of, ‘well, what I think I was trying to say there was…..’ Should I incorporate in my version an inference and understanding gleaned in conversation with Azita but not directly from the poem itself? Or should I add this interesting subsequent gloss to the initial understanding I had gained from the poem itself? The answer, of course, is that sometimes it was appropriate to do so and sometimes it was not. I should not have been surprised by this aspect of the experience. I know that moments in some of my own poems seem clearer to me now, years after they were written. Yet, I had not anticipated this as an element in the work of translation.

Above all I wanted to be true to my understanding of Azita’s poetry. I didn’t want to write in translatorese and I didn’t want to turn it into a Maura Dooley poem. Well, all you can do is try! It was the American poet Elizabeth Bishop who, in a review of William Jay Smith’s translations of Jules Laforgue, commented,

‘By now everyone knows how to review a book of translated poetry. First, one says it’s impossible. Second, one implies that the translator is an ignoramus, or if that’s going too far, that he has missed the plays on words; and then one carps about the inevitable mistakes’.

Walking back from Asia House after the final night of the Persian Poets tour, it occurred to me that, for all its impossibilities, in its drawing together of different cultures, worlds and understandings translation provokes many unexpected transformations. Seventy years ago, when my parents were courting, my father gave my mother a copy of the Rubaiyat of Omar Khayyam translated by Edward FitzGerald. It sits on the shelf in her living room still. So it seems that, were it not for that remarkable connection between two writers all those years ago, I might not be here at all, trying in this modest way to forge a small connection myself.