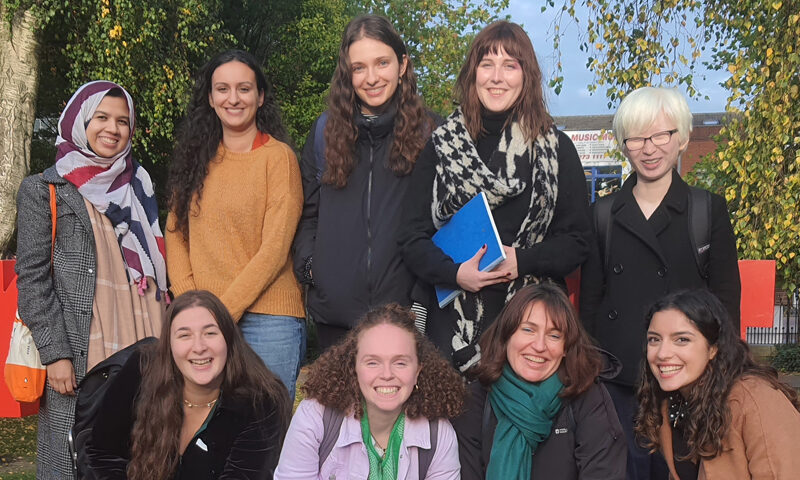 Undertow is the Poetry Translation Centre's youth programme. This year we are running our first national development programme: Polylingual Poets Please. This is a scheme for young mixed heritage poets interested in working with multiple languages. The young poets will be working with the Mexican-Scottish poet and translator Juana Adcock to develop their polylingual poetry practice, creating poems that jump the fence and exist in multiple languages and speak to many experiences, all at once.

Early next year the participants will be sharing the work that comes from the programme with the public.

So without further ado let's meet the Undertow Eight:

Reem Abbas is a Yemeni-Syrian reader, writer and lover of poems and, if really feeling it, the occasional short-story. She read her poems at SolidariTee’s Voices of Voyage poetry evening and is happy to have published her first poem, “Borderline Ghazal”, in the 258th issue of the PNR. She is currently writing her Ph.D. at the University of Cambridge on the Persian artistic and classical poetic influences in the poetry of Basil Bunting. Reem enjoys sipping on loose-leaf teas, listening to the National Arab Orchestra, and improves her Farsi by indulging in gorgeous Iranian cinema.

Nasim Rebecca Asl is a Glasgow-based Geordie-Persian poet and journalist. Her work has appeared in publications such as Gutter Magazine, Modern Poetry in Translation and Middleground Magazine. She has performed her work around Scotland, including at Inky Fingers, Sonnet Youth and Aberdeen’s Look Again Festival. In 2020 Nasim was featured in the inaugural Fringe of Colour Films and the Scottish BAME Network’s Writers of Colour Audio Anthology. In 2021 she was awarded a Scottish Book Trust New Writers Award for Poetry and is the September 2021 Poetry Business Digital Poet-in-Residence.

Liv Goldreich (she/her) is a Year 12 student from London. A 2020 commended Foyle Young Poet and Adroit Journal Mentorship Programme alumna, she also won the Words of Unity poetry competition. Liv is a lover of languages. Besides English, she's particularly interested in Hebrew, German and classical languages, and the etymological weight of words. She loves words that do not exist in English. You can often find her reading Lynda Hull, Anne Carson or Terrance Hayes whilst listening to the rain, exploring London’s lush cultural scene with her friends, theatregoing, building a family tree, or searching for the perfect poetree.

Lydia Hounat is a British-Algerian writer and photographer. She was a Poet-in-Residence at Manchester Metropolitan University's Special Collections Archives. Her work has appeared in HOBART, MAI Journal: Feminism & Visual Culture, and The Babel Tower Notice Board. She co-edits interdisciplinary art zine, SOBER. and is currently curating the French and Amazigh collections at Manchester Poetry Library. More of her work can be found at www.lydiahounat.co.uk

Charlotte Knight is a British-Ukrainian poet, studying a Masters at Goldsmiths College. She is a New Poets Prize winner (2021) and has been commended in the National Poetry Competition (2019). Her work has previously been featured in Magma, SPAM and Perverse, amongst others. Her forthcoming pamphlet Ways of Healing will be out with Smith|Doorstop in June 2022.

Phoebe Wagner is a poet, theatre-maker and facilitator. She joins the Polylingual Poets scheme to work on writing in her first language (English) and combining it with her mother and abuela’s tongue (Spanish). Her debut pamphlet The Body You're In was published with Bad Betty Press, 2019. She is a Roundhouse Poetry Collective alum and Barbican Young Poet. Her work explores the politics in the personal and facilitates dialogue in communities. She also loves trainers and founded Crep Project (Instagram: @crep.project), an arts collective exploring sneaker culture with young, working-class people.

Maggie Wang was raised in the United States and now studies at the University of Oxford. Her writing has appeared or will appear in Poetry Wales, Borderlands: Texas Poetry Review, Bedtime Stories for the End of the World, and elsewhere. She is a 2021 Ledbury Emerging Poetry Critic and has edited for Singapore Unbound, the Harvard Review, and Asymptote. When not writing, she enjoys running, playing the piano, and practising her language skills.

Fathima Zahra is an Indian poet based in Essex. She is a Barbican Young Poet and a Roundhouse Poetry Collective alum. Her poems have won the Bridport Prize, Asia House Slam, Wells Fest Young Poets Prize 2019. She has been featured across BBC World News, The New Indian Express and Young Poets Network. Her work has been anthologised in Everything is going to be okay (Trapeze Books, 2021), SLAM! You’re Gonna Wanna Hear This (Pan MacMillan, 2020) and A Letter, A Poem, A Home (Red River Press, 2020). Her debut pamphlet Sargam / Swargam is out with ignition press.