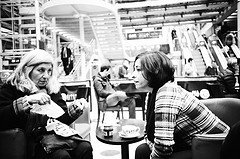 It has been such a pleasure working with the Poetry Translation Centre again, this time on translating the poems of Shakila Azzizada.  My experience in translating Kajal Ahmed proved so useful, since the challenges that Dari and Kurdish present have much in common and I felt a little more confident in negotiating through the difficulties of changing tenses, ambiguous pronouns, metaphorical and tonal complexities that the work of these two wonderful poets presents to the translator.

Again, I was working with a marvellous co-translator, Zuzanna Olszewska, who is Polish but has a brilliant command of Farsi and Dari, and is a foremost authority on Dari literature.  I learned a great deal from Zuzanna who is an experienced translator and scholar and I was so grateful for her rigorous and scholarly approach.  Her attention to minutiae, her respect for the poems and her regard for fidelity and authenticity prevented me on many occasions from taking unnecessary license and going astray.  I think the final translations are a reflection of this, being very close to the original, while working, I hope, as poems in English too.

Shakila has spent many years in the Netherlands and her poetry reflects both her Afghan heritage and her European influences. She also writes in Dutch and translates her own poetry both ways.  She is a very musical poet,  tender and intimate, but also uncompromising in her political poems, and sometimes surreal – a poet of range and courage.  Many of the poems, or parts of them, were relatively straightforward to translate and, perhaps because of the European influence, seemed to slip happpily into English.  Shakila’s voice is not as adorned as some poetry in Farsi that I have read, and is idiomatic and sometimes humourous or satiric.  I speak colloquial Farsi and this of course was a great help as, with Zuzanna’s help, I could understand most of the original.  Zuzanna also recorded a tape for me of the poems we were working on and this, more than anything else, helped me to try and find equivalent idioms while replicating the musical phrases.

After receiving the literals from Zuzanna, we both decided which poems we would work on.  In the event, we ended up with more translations than we would need for the chapbook, though they are all posted on the website. I worked on the drafts before meeting up with Zuzanna with an armful of queries.  These nearly all concerned specific verses or lines whose meanings were not clear to me.  In a few cases where Zuzanna herself was unsure, she would check with Shakila and get back to me.  Subsequent to meetings, we would exchange drafts, notes, queries, responses through emails and it was a very happy exchange, and surprisingly straightforward and hassle-free!

My final phase was checking my lineation with the Dari originals and trying in most cases to keep as close to it as possible.  ‘Once upon a Time’, a ballad-like poem based on a fairty tale, seemed in the English to work better in a more traditional verse scheme and I chose triplets for this where, in the original, Shakila had used verse paragraphs.  I found the poem ‘Recitation’, a tribute to the many young girls killed in the civil war in Kabul and one of Shakila’s post powerful and sacrilegious poems, the most problematic one in translation.  It contains a confusion of pronouns, religious references with satirical punning, colloquial expressions, a host of challenges for the translator, some of which I regret weren’t entirely met successfully.  But it does work well in performance. Contrasted with this, the final poem in the chapbook, ‘Kabul’, a lament and nostalgic poem of exile, seemed to fall naturally enough into the mode of the English lyric.

It was such a pleasure finally to meet Shakila herself, and the other marvellous poets on the Persian Poets’ Tour, and to read with them.  Many congratulations to the Poetry Translation Centre on organising this wonderful tour, and for realising this unique project of translating such poets from Farsi-speaking countries.  It was an enormous pleasure for me to be a part of it and I’d like to thank the Poetry Translation Centre for such a lovely opportunity.