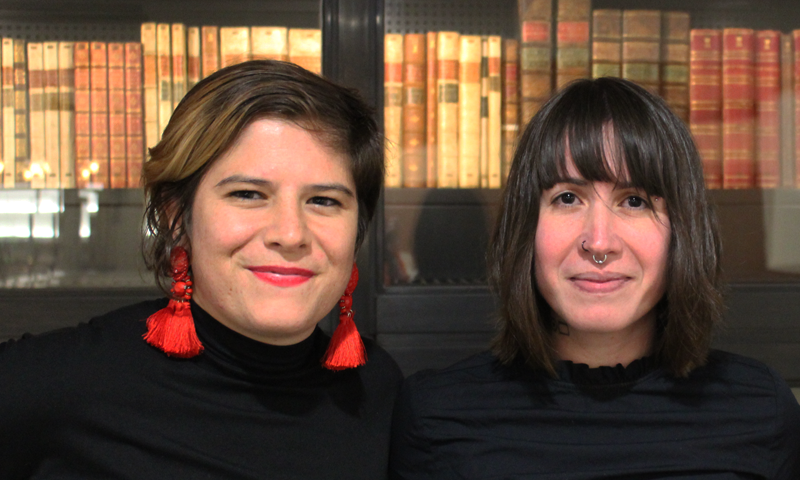 As we launch our audio archive of poems by Legna Rodríguez Iglesias, translator Serafina Vick writes about the process of translating Legna’s work. You can listen to dual-language recordings of Legna's poems in Spanish and English on our free online audio archive soundcloud.com/alittlebodyaremanyparts.

I often say that Cuba is a world onto itself, and never has that been truer than during the COVID-19 pandemic. Whilst everyone else seems to be ordering things online, chatting over Zoom and snuggling down to watch Netflix, Cubans still don’t have affordable or fully-functioning internet. The #Quédateencasa (#stayathome) campaign is almost a joke in Cuba given that you’re obliged to go out and stand in line for hours - sometimes days - just to buy a bit of food. Not only is Cuba a geographical island, it’s also an ideological and economic one. Being so isolated from the rest of the world means Cuba has its own distinctive version of Spanish, even the Cuban word for face mask - nasobuco - isn’t used anywhere else in the Spanish-speaking world.

It’s impossible to live in Cuba and not inhabit the island’s distinct lexicon. When translating Legna Rodriguez Iglesias with Abigail Parry I found that I had unconsciously absorbed so much of it that I sometimes forgot the difference between neutral Spanish and the Spanish I use everyday in Havana: the Spanish Legna uses in her poetry. Much of the translating I did with Abigail was simply explaining the cubanismos in Legna’s work and the infinite cultural references only decipherable to Cubans. Though Legna has been living in the US for the last 5 years she still identifies as a Cuban poet and it’s Cuba that she looks to for inspiration and I think sometimes, reassurance.

There is something reassuring about using words you know only a certain group (albeit a group of around 11 million people) will understand. It’s that old question of belonging. If you look to the person next to you in the queue, raise your eyebrows and say “¡candela!” you know they’ll know you mean “dang, this queue is long” rather than simply exclaiming “fire!” to a stranger for no apparent reason. But it’s not just words, there are thousands of tiny cultural pointers that infiltrate our everyday language. When Legna mentions Heidegger getting off a “camión” in her poem 54 from the collection Transtucted, all Cuban readers know she means an old Soviet army truck used like a bus, as opposed to an HGV. When Galileo wants Legna’s narrator to slide on a royal palm leaf with him in 'The Law of Dynamics' in the collection Sucking the Stone, most Cuban readers have probably partaken in this classic childhood activity and laugh at the instant mental image it evokes. Readers in English are likely to laugh too, but probably more out of bemusement than anything else.

Localised language and cultural references are the translator’s greatest challenge. Not only in the source language but in our own. As translators we can’t pretend that we aren’t both polluted and limited by are own language, culture and life experience. How can Abigail and I faithfully translate Legna when neither we, nor our English reader, have ever ridden down a hill on a royal palm leaf? We’re translating an entire lifetime of experience. We’re trying to somehow reconcile Legna’s culture with our own, with that of our readers, whilst still maintaining the poetry’s otherness. After all, who wants to read a translation of a Cuban poem that denies its very Cubaness? Would we really expect Galileo to be sledging - or performing some other childhood activity common to our culture - with the narrator instead? What would be the point? The very fact the poem is referencing royal palms places it firmly in Cuba - royal palms being the national tree.

When translating Legna’s 8 poetry collections Abigail and I came up against Cubanismos again and again, some glaringly obvious and some more subtle. We had to constantly negotiate between making the poems “work” in English and maintaining the Cubaness of the original. Inevitably, this sometimes involved a pinch of inventiveness, pulling ourselves closer to the original to then draw back from it like the tide. Aware of the fact we were sometimes forced to take liberties, it’s little wonder that Legna says her trust in us as translators is “mistrustful”; she is aware of the innate limitations of translation. Most poets want to be read by as many people as possible, but translation is a huge threat; they’re making a leap of faith, blindly trusting that once their work has been transferred into another language with its own lexicon and cultural signifiers, it will still express what they intended it to.

But then, isn’t that all what poets risk anyway? Once a poem is out in the ether it’s open to interpretation. I found that Legna was often surprised at the meaning we found in her poems, meanings she hadn’t necessarily intended. Really, every reader of a poem is reading a translation, no matter what language they read it in. We translate what we receive into our own context, draw conclusions or make comparisons based on our own experience. It’s translation in its purest form. The only difference in reading poetry in translation is that it has gone through two or more lexical and cultural filters before it reaches you. Doesn’t that make it all the richer? Two poems for the price of one?