People of the Long Word - Thoughts on Georgian translation 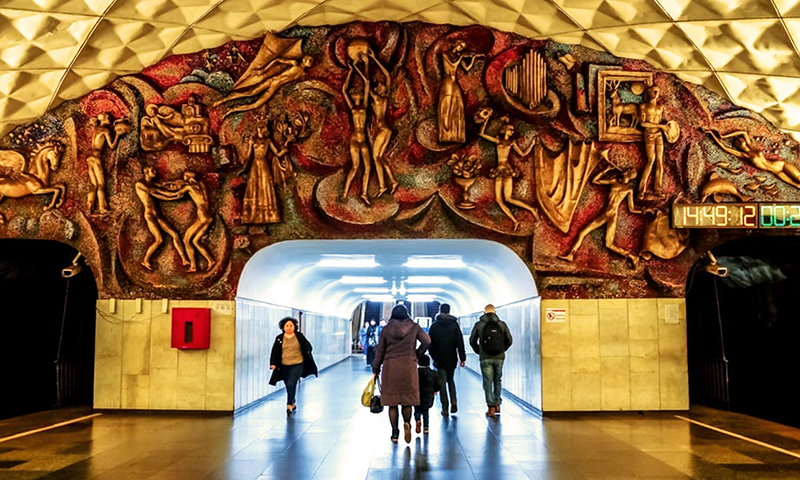 Carrie Foulkes is a poet and essayist based in Sussex who is currently working on an Arts Council England funded project looking at contemporary Georgian literature. She recently returned from a research residency at the Writers' House in Tbilisi, where she spoke with PTC poet, author and translator Salome Benidze and Gurami Ghonghadze, who has translated contemporary classics, including Call me by your name by André Aciman and the work of Sally Rooney, into Georgian. Here you can read her thoughts about the long shadow the war in Ukraine throws over Georgian writers and translators, who are still dealing with their own conflicts with Russia and the effect translation is having on the Georgian language.

When you land in Tbilisi you find yourself at Shota Rustaveli airport, named after a medieval Georgian poet revered for his twelfth century epic poem ‘Knight in the Panther’s Skin’. In the heart of the city you’ll find Rustaveli Avenue and Rustaveli Metro station. On the steep slope of Mount Mtatsminda, which overlooks Tbilisi, there’s a Pantheon of Writers where notable authors and public figures are interred. These and other literary encounters offered me a promising start to a project exploring the place of literature in contemporary Georgia.

The war in Ukraine feels near at hand in Georgia, a nation whose northern neighbour, Russia, occupies 20% of its territory. The ongoing conflict in Ukraine - and Georgia’s recent history as a part of the Soviet Empire - was to inform my conversations with authors, playwrights and translators, as well as with those from other walks of life who crossed my path during my month as an artist in residence at the Writers’ House of Georgia. I was curious to learn how Georgians view themselves and their literature after three decades of independence.

The Writers’ House is an enchanting place that embodies Georgia’s cultural legacies of trauma and reformation. Work is underway to establish a Museum of Repressed Writers in the house. The museum seeks to tell the story of the writers persecuted by the totalitarian state and the historical circumstances in which these events unfolded. The brutal force of the repression of musicians and writers in Soviet times, along with the energies and resources dedicated to sanctioned forms of cultural expression and propaganda, are a testament to the power and influence of these art forms in civic life. The garden behind the mansion bears a plaque with the names of writers persecuted and executed by the Soviet regime.

Novelist, playwright and translator Davit Gabunia talked with me about how theatrical texts changed structurally in the 1920s and 30s, and how a cross section of these literatures over time reveals their shifting social and political contexts. This was a fascinating insight into the ways in which historical analysis of literary works can illuminate the conditions in which they were written.

Author and translator Salome Benidze told me about growing up in the 90s and early 2000s: ‘you felt like you were participating in the rebirth of your country’. She remarked: ‘We lost the intellectual power of this country during the Soviet invasion and suppression of the 30s. We had a chance to be a nice European nation and then our best representatives were killed or exiled’. I had the good fortune to meet with her several times, learning about her family history, her work, and her thoughts on Georgian culture. ‘If you’re a writer in a small country you feel like everybody knows you’, she told me. This closely networked and mutually supportive world of writers, editors and translators was evident to me. The Writers’ House plays a vital role in facilitating connections and providing a site for literary activities in Tbilisi as well as serving as a representative of Georgian literature abroad. ‘We are people of gatherings,’ Salome said of her fellow Georgians, and she was right: the hospitality, warmth and social life I experienced in Georgia were unlike anything I had come across before.

I was struck by the ways in which the art of translation from English into Georgian is creating conceptual and linguistic shifts within the Georgian language itself, offering Georgian authors and readers new ways of expressing ideas and new forms to experiment with. Translator Gurami Ghonghadze spoke of how Georgian is ‘a masculine and rigid language - sensuality and sexuality don’t readily translate into it’. You have to ‘go too light or too hard’, using ‘words my mother would hate’.

Gurami told me he had to invent words when translating the novel Call Me By Your Name, as he felt that the ‘medical terms for body parts’ available to him in Georgian didn’t communicate the spirit of the text. ‘Georgians reading translations feel empowered to think and write differently’, he told me. He also shared some of the challenges and choices he faced when translating works by Sally Rooney: ‘her work is so conversational, but also literary, and it is hard to hold both styles in Georgian’. These translations contribute to the evolution of the Georgian language and to accompanying changes in the broader culture that remains deeply influenced by the Orthodox Church.

Davit reflected on how imperialistic languages that travelled internationally were broken down into pronouns, ‘externalising everything’. In more ‘isolated’ languages such as Georgian, ‘everything is inside, the words transform and change shape’. Verbs are complicated in Georgian, they go through many changes: ‘if you change the verb you have to change all the other words’. There are numerous translators working to create Georgian editions of English texts. However, there are far fewer translations from Georgian into English. Ani Kopaliani, who has a doctorate in translation studies, explained that translators usually translate into their mother tongue. You need full proficiency in the language into which you’re translating to know all the ways things can be expressed, and there are not so many native English speakers who also have full fluency in Georgian. This is a grammatically challenging language to learn, its words can be notoriously long: a lot of meaning can be held within a single, dense word. Before my travels, I walked on Hampstead Heath with a London friend who shares my love of Georgian polyphonic singing and is learning the language. He told me: ‘there can be three people in the verb.’ It’s not only technical skill that’s important. Ani believes ‘inspiration is essential’ when translating poetry, the process takes time and can’t be rushed.

During a meeting on a sunny café terrace, translator and writer Dalila Gogia spoke with me about some of the anglophone poets she’s translated into Georgian, including Louise Glück, Sharon Olds and Allen Ginsberg. In addition to her translations of 1950s and 60s Beat poetry she has also written about its context, seeking to introduce Georgians to the cultural significance of Beat literature and to affirm its continuing relevance. Dalila believes that the work of translation can keep the knowledge of the power of social movements alive. It also serves the orientation of Georgia towards Europe: ‘we need to protest against everything Russian,’ she said, echoing a sentiment that’s widely found in the graffiti on Tbilisi streets and a growing aversion to the Russian language and what it represents. Many people in the older generations still speak Russian regularly and the question of the status of this language in Georgia is increasingly fraught. The geopolitical situation makes it difficult to be non-partisan.

In the garden behind the Writers’ House, not far from the plaque with the names of authors who died in the repressions, I spoke with poet Lela Samniashvili. She said that the practice of writing was constantly with her through all the upheavals and changes in her country. ‘I don’t have bombs to express myself, I have poems’, she said. In this excerpt from a poem she wrote in the days before Russia’s invasion of Ukraine, the mood of tense anticipation is palpable:

Will the war start?
It feels like waiting for a diagnosis
After an MRI.
Will the aneurysm burst
Inside forehead or heart?
The doctors are shaking their heads.
They don’t say yes or no.

We spoke of the ethical issues involved in writing poetry about war, the ways in which it risks becoming exploitative to write of the suffering we see elsewhere, of other people's losses. When Soviet rule collapsed and Georgia became a free nation, Lela was in early adolescence. It was a shock for her to realise the extent of the lies she’d absorbed about her country’s history. We shared some of our sorrow about the current conflict. ‘There’s no meaning to life if we don’t believe change is possible’, she said.

In a Tbilisi wine cellar I learned about the kisi, a soft white-wine grape indigenous to the eastern region of Kakheti. Wine culture started in Georgia eight thousand years ago: ‘when France acknowledged that Georgia was the first country to make wine, this was a huge honour’. My favourite Georgian wines are those made in qvevri, clay vessels that are buried in the ground and left untouched in the darkness for months. These wines are dry, earthy and full. Apparently the Soviet regime attempted to burn all the kisi vines during various hostilities, but a seed survived. Just like wine, literature is resilient, and has blossomed here in the past twenty years. Much has been destroyed during Georgia’s tumultuous history, but many things endure. They continue to be tended and to grow. We are invited to celebrate them.

The Writers’ House of Georgia
Arts Council England
Salome Benidze
Davit Gabunia
Gurami Ghonghadze
Dalila Gogia
Ani Kopaliani
Lela Samniashvili
Khatuna Tskhadadze
Yash Lad
And with thanks to the many others, unnamed here, who generously shared their time and thoughts with me in Tbilisi.

Find out more about the Writers’ House of Georgia