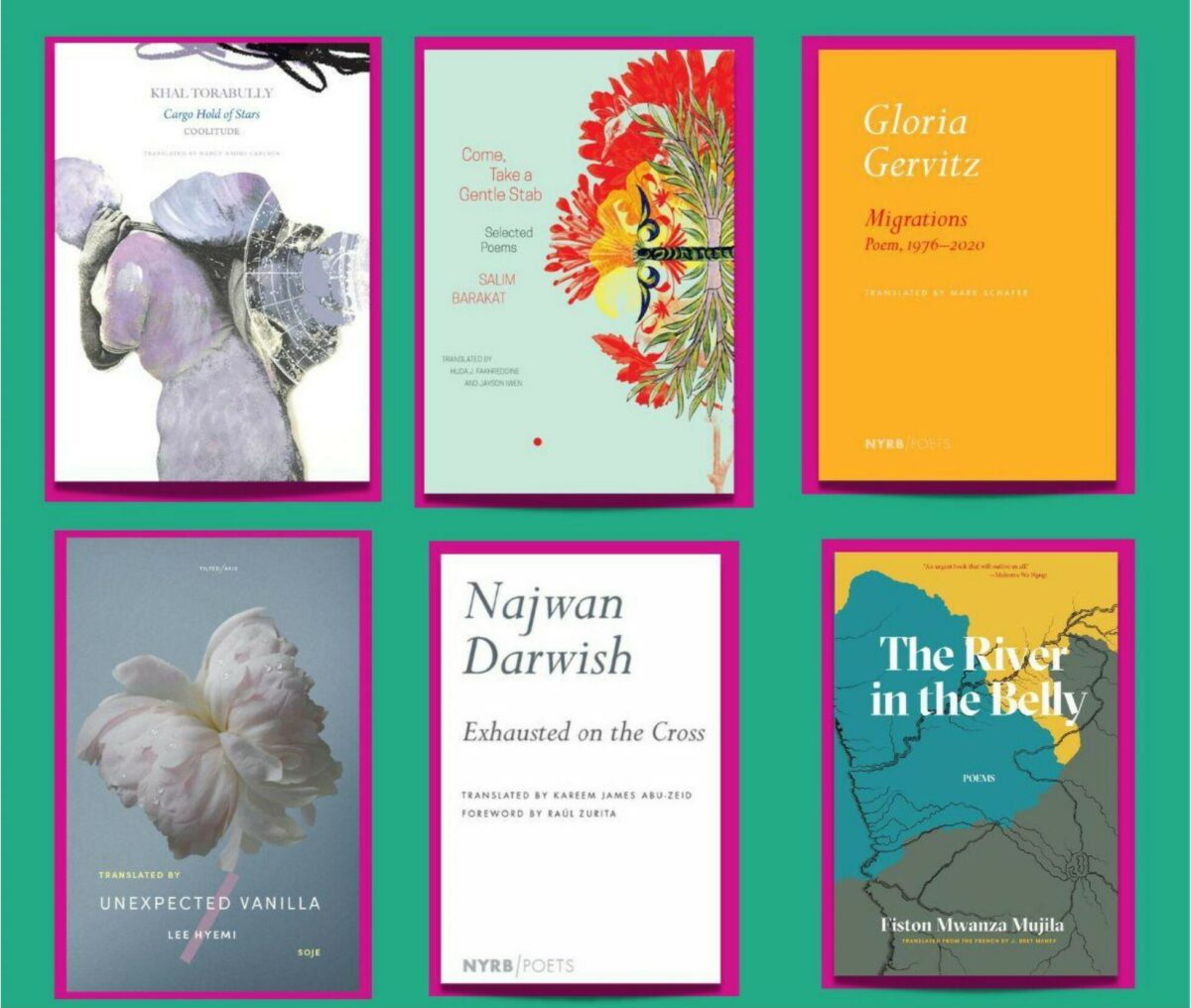 The shortlist for the 2022 Sarah Maguire Prize for Poetry in Translation is announced today. The biennial prize recognises the best book of poetry by a living poet from Africa, Asia, Latin America or the Middle East published in English translation.

The 2022 Prize was judged by Rosalind Harvey (Chair), Kit Fan and Kyoo Lee. The six-strong shortlist includes poets from the Democratic Republic of the Congo, Korea, Mauritius, Mexico, Palestine and Syria.

The winning book will be announced on Tuesday 1st November. The winning poet and their translator(s) will share a £3,000 award.

To celebrate the shortlist, the PTC today publishes The Sarah Maguire Prize Anthology 2022, featuring selections from each shortlisted book and an introduction by Rosalind Harvey.

The shortlisted poets and translators will take part in a series of online events throughout October, organised by the Poetry Translation Centre (PTC) in partnership with the British Council, The Africa Centre, the British Centre for Literary Translation and Manchester City of Literature. For more information see: www.poetrytranslation.org/events/series/sarah-maguire-prize-2022-events

‘Translation is about movement and possibility, and these books all invite us to explore what that movement has meant and might mean. In a world full of endless stark opinions, where nuance often struggles to get a word in, of endless facts and ‘alternative facts’, these collections invite us to uphold poetry’s – and translation’s – innate open-endedness, its ability to allow for possibility, for multiple answers as well as questions.’

Written by one of South Korea’s exciting new female poets, Unexpected Vanilla takes on issues of feminism, discrimination, and body image. Lee Hyemi’s words are brought to an English-speaking audience by Soje, who successfully translates the silky yet biting lyrics that conjure up vivid imagery.

Exhausted on the Cross is a beautiful collection by one of the Middle East’s best known contemporary poets. Darwish’s graceful verses bring to life notions of displacement, faith and conflict – which are brilliantly conveyed through Kareem James Abu-Zeid’s translations.

Written by the renowned Kurdish-Syrian poet Salim Barakat, Come, Take a Gentle Stab is a collection of his works spanning five decades. Often drawing on ideas of conflict, violence and identity, Barakat pens his poems in Arabic, despite his native language being Kurdish. Fakhreddine and Iwen’s translations successfully bring the flow of Barakat’s creativity to the Anglosphere.

Migrations is an epic poem written between 1976-2020 by the late Mexican poet Gloria Gervitz (1943-2022). The nature of time, the subconscious, and the female body are explored in this piece with striking lyricism and dynamic compositions. Mark Schafer’s radiant translation from Spanish aptly puts Gervitz’s mind across, bringing her illustrious poetry to English.

The meditative, yet forceful Solitudes of Fiston Mwanza Mujila revolve around The Congo River; the beauty, terror and mayhem it delivers along it’s banks. Composed of Solitudes, varying in length, the human condition is explored veering into notions of identity, the body and societal turmoil. And with vivid translations by J. Bret Maney, the imagery of this piece is perfectly illustrated for English speakers.

Cargo Hold of Stars is a homage to the voyage taken by millions of people from India and China to Mauritius and other former European colonies in the 19th and 20th centuries. Erased from history, the voices of these men and women are brought to life through Khal Torabully’s musical contemplations. Colonialism’s ugly past, along with expressions of identity, migration, and resilience are all presented in this piece. Nancy Naomi Carlson’s masterful translations distinctly deliver Torabully’s unique voice to English speakers.

Rosalind Harvey is a Fellow of the Royal Society of Literature, and translator of a number of works including Juan Pablo Villalobos’ debut novel, Down the Rabbit Hole, shortlisted for 2011 Guardian First Book Award and the 2012 Oxford-Weidenfeld Translation Prize. Her translation of his work I’ll Sell You A Dog was longlisted for the International DUBLIN Literary Award, and that of his YA title about the journeys of teenage Central American immigrants to the United States was shortlisted for the Kirkus Prize. Harvey is also chair and co-founder of the Emerging Translators Network, and has taught translation at the University of Warwick, the University of Bristol, and the University of Roehampton.

Kyoo Lee is a philosopher, traveller, writer and critic, who currently teaches at the City University of New York where she is Professor of Philosophy. A recipient of faculty fellowships from Cambridge University, CUNY Graduate Center, Ewha Womans University, KIAS, the Mellon Foundation, the NEH, Seoul National University, and Yanbian University, among others, she publishes widely in the interwoven fields of the Arts and the Humanities. Throughout her site-specific philopoetic practices, ‘Q’ explores co-generative links between critical theory and creative prose. A scholar active in editorial fieldwork, she translates from Korean into English.

Kit Fan is a novelist, poet, and critic. Diamond Hill, his debut novel about Hong Kong, was published by Dialogue Books and World Editions in May 2021. His second poetry collection, As Slow As Possible was a Poetry Book Society Recommendation and one of the Irish Times Books of the Year. He was shortlisted twice for the Guardian 4th Estate BAME Short Story Prize, and a winner of Northern Writers Award, the Stephen Spender Poetry Translation Prize, and POETRY’s Editors Prize for Reviewing. He translates from Chinese into English.