‘Somali Night at the Bluecoat’ 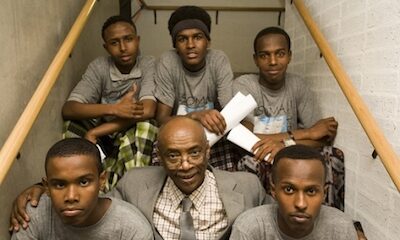 I never realised the Moon landings had such a profound and far-reaching effect. For Corsino Fortes, driving his battered Peugeot 204 from Kuito to Luanda, the moment he heard the Americans had touched down was a revelation. He stopped the car, got out, put his hands on his head and looked up at the sky.

'Corsino', he said to himself, 'open your mind. You don't know anything about the universe.'

For Gaarriye, sitting outside his house in Hargeysa, it was a very different feeling. Once the moon was conquered, once he knew that men had walked about on it, touched its surface, it lost its magic.

And when he visited the tiny piece of Moon rock the Americans had donated to the National Museum, he was not impressed.

For one poet it was the beginning, for another the end. A new idea of the Moon and the heavens opened up for Corsino and inspired him to write, while for Gaarriye, the moment was one of loss, of the Moon's mythic significance diminishing, demystified.

But I digress. The World Poets Tour rolled into Liverpool today and brought Gaarriye and WN Herbert to the Bluecoat arts centre on School Lane.

Before they read their poems, six young lads from Shorefields school (now known as 'Somalifields') launched their own collection with a reading of the poems they have written in the last six months.

They have been working with Hamida Yusufzai from Liverpool Reads, the city-wide reader development project, and Maura Kennedy from the Bluecoat. They have read Gaarriye's poems and been inspired by his writing about Somalia.

And the results are impressive. Gaarriye, sitting in the front row, was visibly moved by what the lads had done. The audience applauded enthusiastically. Gaarriye gave a speech in Somali and English, saying how proud he was to see these young Somali poets taking up his mantle and writing such excellent poems.

And then, after a short interval and lots of photographs of Gaarriye with the lads, it was time for the main reading.

This was actually the first time Gaariye had met WN Herbert, who, together with Martin Orwin, translated his poems into English. But you would never have guessed, as the two poets immediately hit it off.

Gaarriye read first, instructing the audience to listen carefully for the alliteration in his lines, using his arms to stress each repeated sound. He swayed with the rhythm and bobbed his head. 'All poetry has a music, and music is a universal language', he said.

It is a daunting task to follow Gaarriye, to imbue the English translation with a sound and a rhythm as powerful as it is in the original. And it is a measure of WN Herbert's own skill that he managed to do just that.

If anything did get lost in the translation, it was hard to tell what it was. Gaarriye said, 'I felt as if he was reading my work'. And what higher compliment for a translator can there be than that?