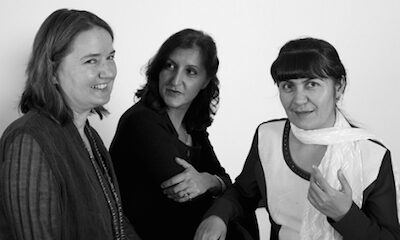 From my point of view, the creation of the translation team for Farzaneh Khojandi's poetry was magic. First there was Farzaneh's work itself: searingly pure, full of integrity and all the richness of the classical Persian tradition. Then there was Narguess Farzad, a scholar of Persian literature and an enormously sensitive reader of poetry in both languages, contemporary and historical.

Stepping into this totally new area of poetry was daunting. I was aware of the complexity and richness of the tradition Farzaneh writes in but my knowledge of it was limited. Narguess was the ideal guide, teacher and interpreter for this journey. Our meeetings took place in the Common Room at SOAS, Narguess's workplace and only a short stroll for me from my teaching base at Royal Holloway's building in Bedford Squatre. At our first meeting Narguess gave me a selection of her literal translations of Farzaneh's poems, complete with informative notes, line by line. They were already a graceful read and it was clear at once that her versions were going to be a pleasure to work with. Narguess read to me from the poems in Persian that first time, too, and most subsequent meetings. This proved to be crucial and fruitful - when I first heard Farzaneh read, I felt I had caught some of her music, which was down hearing Narguess in my head as I worked at the poems.

At the second meeting I came armed with my first effort, nervous and wondering if this was a step too far. The diction and subject matter was so far removed from my own work that, at this early stage, I felt clumsy and always several footsteps behind. The sincerity, the passion, the direct calls to tradition, spirituality, morality, brother, lover, 'O my camel-driver!' seemed worlds away from the modern, urban context of my own work. The first poem I attempted was 'The Flute Player' and Narguess was pleased with it, our discussions that day helping me towards meeting Farzaneh's world and concerns.

That talk and our subsequent encounters clarified my task which was to be much less about my own voice and attitudes than any previous 'versioning' I had done, and much more about Farzaneh. Some of the phrases and ideas her poems presented to me were patterned in a high, even florid register, achieving an ornate, sometimes archaic note that I would never attempt in my own work. But I found when I tried to disrupt this effect in the process of translation, Farzaneh, the context from which her work emerges, and the complexity of her ideas were lost and nothing much was gained. I had to 'allow' gestures and tropes which were not my natural writing medium in order to let the poet through. And, as you can tell, the resulting work is very much a joint translation by the two of us, Narguess and me.

Narguess's role was doubly and trebley important because communication with Farzaneh was difficult. Physical logistics first of all. I learned that Tajikistan exists in the shadow of more powerful neighbouring states which control access to power and other resources. Electricity is intermittant, only a few hours each day. This was brought home to me powerfully during the tour, when Narguess visited Farzaneh and her husband in their room in the Kensington Hilton one evening, to pick them up, and found them - out of habit - waiting in the dark. During the period Narguess and I worked on the translations, email contact between Farzaneh and Narguess was understandably erratic because of these restrictions, and not helped by the fact that at the most intense period of our work, Tajikistan was experiencing the hardest winter for years. At one point we lost contact completely for weeks and were quite worried about her.

During this time, I relied on the indefagitable Narguess for general support and answers to my growing number of questions. We battled through pretty well: the only difficulty was that comments and answers from Farzaneh finally came through very close to all the publication deadlines and it was quite a feat - mainly from Narguess, again - to shoehorn everything in. A good example is the line in 'Spring is Coming' in which some quite obscure Tajik vocabulary led Narguess to think it involved a specific type of red duck in bubbling streams, rather than blood coursing through veins which is the sense Farzaneh intended. Once the information came through from Farzaneh, we manged to create a more faithful line in the nick of time. I think both of us still feel our versions are a work in progress and that we would make changes if it went into another edition.

An interesting difficulty for Narguess, but not so much for me, was that Farzaneh's very pure, classical Persian is written for the reader in Tajikistan, in cyrillic script, not arabic script. Narguess, from Tehran, reads Arabic script. For this reason, the poems we translated were taken from the Persian edition of Unending Sigh, published in Iran in 2007. Farzaneh felt these poems were from an older phase of her work and would, I think, have chosen a different set if she could, but the advantage for me was that the work we looked provided a broader stylistic range than her more recent, more traditionally formal poems.

Reading over these last paragraphs, I'm concerned that they may sound like complaints about difficulties. I don't mean that at all. These practical concerns helped bring home to me the magnitude of the step I had to try to make, linguistically, culturally and geographically, to come to terms with the poems. Paradoxically, any obstacles were a help towards poetic understanding: complacency and comfort would never be options.

Thank you PTC, for Narguess and for Farzaneh.