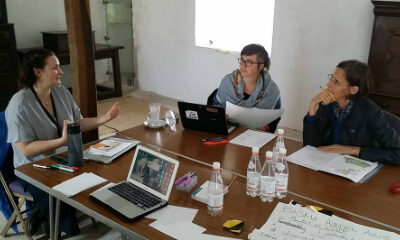 The act of naming something can be difficult, fraught even. When that something is a someone, I feel particularly uneasy. Even if that someone is me. I think this is a fairly common anxiety, perhaps particularly so among poets. Many of the poets I've met seem to demur from being called - or calling themselves - a ‘‘Poet”. It’s as if “Poet” is just too large a claim, acting as a shibboleth that might give them away as phony. Or perhaps that’s what I infer, what I suspect of myself. I’ve certainly shrugged the label off... “Well, I written some poems, maybe, but I wouldn’t say I’m a poet…”

One of the pleasures of my current job is that I’m so often coming into contact with poets from backgrounds and traditions that aren’t the same as mine. Naturally, this has meant that some of the presumptions and anxieties around the naming of things is quite different. In Somali culture, for instance, I’ve been struck by the vigor with which poets proclaim their role as a capital-p Poet, both within the subject matter of the poems and, with wit and elegance, in person. But if anxieties and norms differ, what poets from all cultures do seem to share is a reverence for their material, words, and for the act of describing something by choosing the right ones. It reminds me that to name something is, in a very real sense, to translate it. When we call a chair a ‘chair’ we recreate it in the mind but differently to a ‘stool’ or a ‘seat’, it appears to us in a remarkably general and particular state, where one of these words is right and another, somehow, a little wrong.

So in 2019 we’ve decided to re-translate our translators. As many of you will be aware, the PTC creates translations from two methods. The majority of the poems on our website come from poems encountered in our Poetry Translation Workshop, a collaborative group translation where poems are often given their first life in English. Alongside the method of group translation in the workshop, we also have a poet-pairing method, where an international poet is brought together with a leading English-language poet for one of our publications. In both methods, the process relies on a language expert to facilitate the process, whether that is guiding a roomful of people in a workshop or working with a single well-known poet. Often, this translator will be the only person involved who knows the source language and can explain the nuance of the original choice of words. These translators are providing the essential work that makes the encounter possible in the first place, without them the two languages would float adrift. To date, we had called work of these translators ‘literal-translations’ and for a long time people at the PTC have felt a little uncomfortable with the term. We’ve decided to change it to ‘bridge-translations’, which you’ll see across the website and in all publications going forward. The term ‘bridge-translation’ has been creeping into our discussions more and more over the last couple of years. It simply seems more fitting. ‘Literal’ has a stiffness and certainty to it that feels antithetical to our approach. Calling something a ‘literal’ translation communicates both the burden of unachievable exactitude and the inaccuracy of a crib.

The idea of a ‘bridge-translation’ came, suitably enough, from one of our bridge-translators. She spoke of feeling that her work as a translator was more of a bridge. That she felt her job was to go between the languages, to carry across that which could be taken. This had a clinching ‘rightness’ to it for us, much like the feeling when you happen upon just the right word translating a poem. ‘Bridge-translator’ felt apt, speaking to the active connections these translators make to allow the rest of us (often not speakers of the source language) to encounter the original in the first place.

So from now on every poem displayed on the website will state its ‘poet’ and then its ‘bridge-translator’ and finally its ‘final translator’ (whether that’s an individual poet-translator or the Poetry Translation Workshop as a group of people working together on a given day). I hope that you understand and support this change. I feel better about it, as do the others here at the PTC. Now all we have to do is think of a new word for ‘final’...