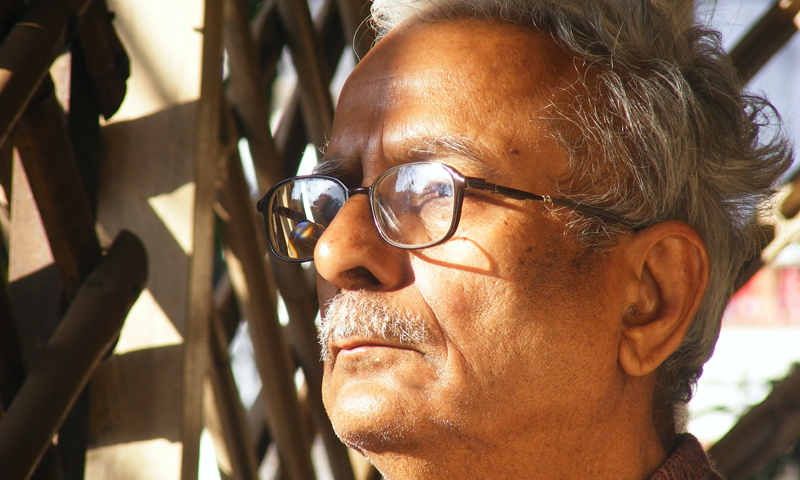 For the Poetry Translation Centre Blog, I spoke to Vinod Kumar Shukla, one of the most treasured writers in India today. At the age of 84, Shukla continues to produce novels and poetry in Hindi from the town of Raipur, Chhattisgarh in central India. His first collection of poems Lagbhag Jai Hind/Almost Jai Hind was published in 1971. Vah Aadmi Chala Gaya Naya Garam Coat Pehankar Vichar Ki Tarah/The Man Wore a New Woollen Coat and Went Away Like a Thought was his second collection of poems, published in 1981. His poetry can be categorised within the Experimental (Prayogvaad) or New Poetry (Nayi Kavita) tradition of Modernist Hindi poetry, and he continues to challenge the norm of structure, grammar and lexicon through his sparse, powerful verse. His poems have featured in international publications ranging from Granta, Metamorphoses and Modern Poetry in Translation.

He has written six novels, which have been translated into English by American academic Prof Satti Khanna. Shukla’s writing style has been known to border the genre of ‘magical realism’, although his writing is refreshingly original and strikingly visual. Shukla has won some of the greatest literary honours in India, including the prestigious Sahitya Akademi award for his novel Deewar Mein Ek Khidki Rehti Thi/A Window Lived in a Wall in 1999. His first novel Naukar ki Kameez/The Servant’s Shirt, published in 1979, was adapted into a movie by one of the most innovative, avant-garde filmmakers of India, Mani Kaul.

Sumana Roy, Indian poet and novelist, claims that, “I have no doubt that Shukla, had he been European, would have been one of the most well-known writers in the world”. A quiet recluse, Shukla prefers to steer clear of the literary limelight, but here is a glimpse into his thoughts on writing, translation, and the things that inspire him…

MG: Vinod ji, what is the greatest change you have observed in yourself as a writer, from when you started writing to now?

VKS: There have been no major changes in my life as a writer, roughly speaking. I used to write earlier too, probably from the age of fifteen-sixteen. That was when it started. It has been sixty-sixty five years since I’ve been writing.

One day I realised that I do not think in language. I think in images. Even when there was no language, primitive man must have thought in images. Language came much later. I think of the image first, and then I write it down in language.

Writing is a responsibility. I did not really know this before. I have grown up writing, just like one grows up playing games. But there is a tradition of writing. I too have tried to stay afloat within this tradition. Some have learned to swim. For me, it has become a habit, like a daily routine. Writing is a task that remains unfinished. This task for me is always unfinished. I have still not mastered the art of writing, despite writing for so many years. The challenges I faced as a writer before, I still face them. For me, writing is still always an attempt to write.

Are you involved in the translation of your poems and texts, and are you happy with your tone and voice that they have captured in English?

My translators sometimes come to me with their doubts while translating my poetry or fiction. I respond to them, but do not interfere. Satti Khanna (the translator of Shukla’s novels) has been in America for 40 years. While translating, he keeps the American reader in mind. Sometimes I agree with this, sometimes I do not. But like I said, I do not interfere. I want the structure of the translation to reflect the structure of my work. I like listening to my writing in another language. The names of characters and places remain the same in the translation.

For instance, when Mariola Afridi read out her Italian translation of my poems in the city of San Benedetto, I heard my name Vinod Kumar Shukla, Nandgaon, Raipur etc. This sounded nice to me.

Blue is Like Blue (a collection of Shukla’s short stories), translated by Arvind Krishna Malhotra and Sara Rai, won the Matribhumi award. This is the first award for my work which is not in Hindi. The award has gone to the translation, and not the original language.

What is your writing process these days, and have your recent stories/poems for children been published? Are they available in original, and translation?

I keep writing. Like the olden days. I think I have less time left.

I am not able to write at night any longer. Even though I do not sleep early. My words come to me at night and I spend the day trying to write them down. I am bringing out three new books for children - a story collection, a poetry collection and a diary. All three will be in the original language, Hindi, not in translation.

Do you use language differently for adults and children - or does the age of the reader not matter while you write?

When I write for children, I am conscious of their age. But my language is the same as the one I use for adults. My language does not change. I do not assume that children are inferior because they are younger. I believe they are wiser than their years. So, my language remains the same but sometimes my sentence structure may vary.

I believe 'rhyme' is the language of children, it captures their innocence, childishness and emotions. By using rhyme, we include them and make them a part of our world.

Which of your characters has stayed with you the longest and why?

The character that has remained with me in my writing from the beginning is me. Whatever I have written is inspired by my own life. I am in the “I” of my works. The places I write about are places I have seen and visited. What I have not seen or heard, I have made my own through the power of imagination.

Where do you draw your inspiration from?

I draw my inspiration from the future. The future is full of my hope.

The original interview was conducted in Hindi, and has been translated by the interviewer.