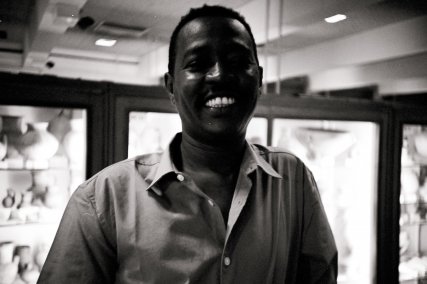 On his first visit to the UK since our  2008 World Poets' Tour, Al-Saddiq Al-Raddi read alongside his translator Sarah Maguire at the Petrie Museum in London.

This was a very special evening indeed. The reading took place among the museum displays and our capacity audience was housed down a long narrow aisle between the cases. It was a remarkable experience hearing Saddiq and Sarah read in an environment housing so many rare and precious artifacts from Sudan. Also on display at the Petrie Museum is a beautiful painted scroll featuring Saddiq's 'Poem of the Nile' in Arabic and English.

We are very grateful to Stephen Quirke, Curator of the Petrie Museum, for his interest in Saddiq and his support of our work.

The Petrie Museum houses an estimated 80,000 objects, making it one of the greatest collections of Egyptian and Sudanese archaeology in the world.  It illustrates life in the Nile Valley from prehistory through the time of the Pharoahs, the Ptolemaic, Roman, Coptic periods to the Islamic period.