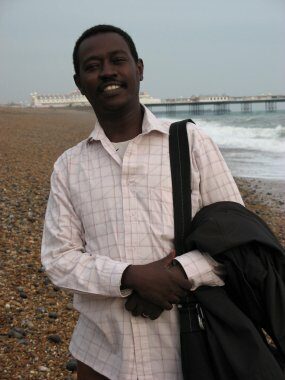 The PTC was delighted when we were asked to participate in the Lit-Up Festival in September 2006, a showcase of poets and performers for an audience of arts professionals that was designed to stimulate interest in innovative live literature events. We were particularly pleased that Al-Saddiq Al-Raddi was specifically asked to join us, and this prompted us to arrange a brief tour for him that autumn.

Following the Lit-Up event in Kendal on 21st September, Saddiq was invitited to the British Centre for Literary Translation (BCLT) at the University of East Anglia for a workshop on translation and to read his poems on 5th October. On 12th October he gave a reading at SOAS and then on 19th October at Brighton Library.

All of these events were received with enormous enthusiasm by both Arabic-speakers and those in our audiences who'd never heard poetry read in Arabic before.

After the Brighton reading, Sarah Hutchings, who organised the event, sent us this email: 'I just wanted to say thank you again for such an inspiring reading last night. You could tell that the audience loved it and wasn't it great to have some Arabic speakers in the audience? Please also pass on my thanks and congratulations to Saddiq, whose poetry is beautiful.'

We are really grateful to Al-Saddiq Al-Raddi who's poetry and visits to the UK have contributed such a lot to our success.

In addition, we'd like to thank the Arts Council, and the British Council, Sudan who's generosity made this tour possible.