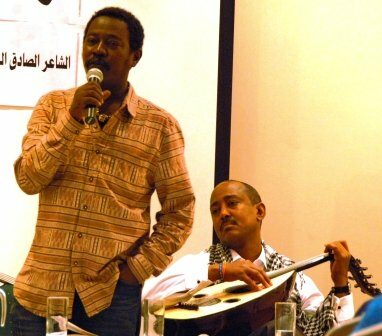 In the first of two evenings arranged by the Sudanese community, Al-Saddiq Al-Raddi read his poetry in Arabic alongside singer and oud player, Tariq Abu Obida and poet, Moiz Omer Bakhiet at London's Hilton Hotel near Euston.

Saddiq and Tariq have been friends since childhood. They are both extremely famous in Sudan and within the Sudanese disapora. Tariq has lived in exile in The Netherlands for many years and, although he visits the UK regularly, this was the first time that he and Saddiq had a chance to perform here together. The event lasted for more than three hours andSaddiq and Tariq received an overwhelming response from a capacity audience of more than 100 people who were clearly both moved and delighted to be able to witness them performing together in the UK for the first time.

See all events in: Al-Saddiq Al-Raddi at The Petrie Museum