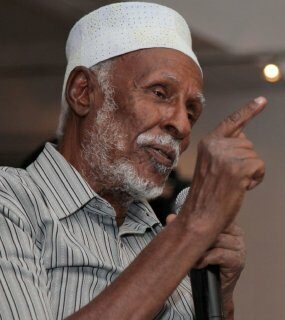 Somalis are arguably the most poetry-obsessed people in the world and their most fervent devotion is reserved for Maxamed Ibraahin Warsame 'Hadraawi' who is profoundly loved and admired by his people not only for his peerless poetry but for the principled stand he has always taken - sometimes at great cost to himself (he was imprisoned for five years by Siad Barre's dictatorship) - against corruption and the depradations of inter-clan fighting that have deeply scarred Somali society.

Hadraawi (whose name means 'master, or father, of speech') was granted the prestigious Prince Claus Fund Award, to celebrate which the Poetry Translation Centre, in partnership with the Redsea Cultural Foundation and Kayd Somali Arts and Culture, embarked on an ambitious programme to translate a selection of Hadraawi's poems. This true labour of love was undertaken by the British poet, W N Herbert, working closely with the Somali translators, Maxamed Xasan 'Alto' and Said Jama Hussein. The resulting full-length book, Hadraawi: The Poet and the Man, which has just been published to huge enthusiasm, reveals the breadth of Hadraawi's concerns and his dazzling mastery of metaphor in brilliant translations.

This was a very special opportunity to witness Hadraawi reading his poems. He was joined by PTC Director, Sarah Maguire, who read W N Herbert's magnificent translations. A packed audience gave a hugely enthusiastic response to Hadraawi at this very moving evening.

Please note: this event had to be rescheduled from 7th November due to Hadraawi encountering visa problems. Unfortunately, Bill Herbert is unable to take part.