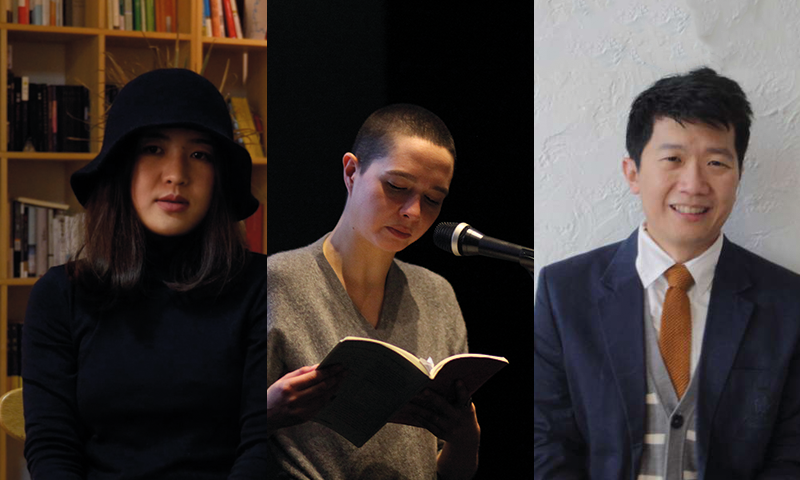 In the morning, starting at 11 am this event will be celebrating the work of Li Er 李洱, with readings and Q&A with Jeremy Tiang, the translator of Li’s most recent novel to appear in English, Coloratura 花腔 .

Then, after lunch, Yu Yoyo 余幼幼, one of the most important young voices in contemporary Chinese poetry, will lead an afternoon of bilingual readings in Chinese and English and discussion, alongside translator Dave Haysom who collaboratively translated Yoyo’s work with UK poet A.K. Blakemore.

Yu Yoyo began to earn critical attention before she turned sixteen, publishing dozens of poems in Poetry, Poetry Monthly and other prestigious publications in China. She studied business management and accounting in university, but never gave up on her long-standing passion for poetry and finally embraced her life’s calling upon graduation. Now seen as a representative voice among the post-90’s generation, her collection Seven Years was published in 2012. She currently lives in Chengdu.

Li Er is a novelist and short story writer. Despite his modest claim to be a "not very prolific" author, he has published five story collections, two novels and approximately 50 novellas and short stories. Although Li Er is still relatively unknown outside of China, he is widely respected in Chinese literary circles and has acquired a passionate - even rabid - fan base of highly literate and intellectual readers. He has also attracted a great deal of attention among literary critics and academics for his stylistically innovative prose.

Jeremy Tiang is a Singaporean writer, translator and playwright based in New York City. Tiang won the 2018 Singapore Literature Prize for English fiction for his debut novel, State of Emergency, which traces leftist movements throughout Singapore's history.