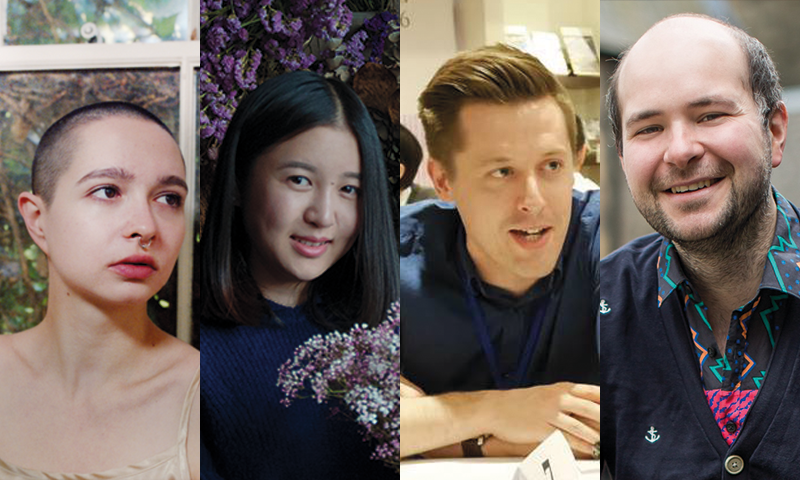 Poets Yu Yoyo and her translators A.K. Blakemore and Dave Haysom read from My Tenantless Body, and Colin Herd of the University of Glasgow responds to translated text in the exhibition The Annotated Reader, currently being shown in The Fruitmarket Gallery.

Every Thursday for the duration of the exhibition the organisers invite authors, as well as local writers, curators and academics to respond to the exhibition, adding another layer to its annotations. Conversations between texts emerge, different pages of the Reader come to the fore as these readings are presented within the installation.

Born in 1990, Sichuanese poet Yu Yoyo had already begun to earn critical attention before she turned sixteen, publishing dozens of poems in Poetry, Poetry Monthly and other prestigious publications in China. She studied business management and accounting in university, but never gave up on her long-standing passion for poetry and finally embraced her life’s calling upon graduation. Now seen as a representative voice among the post-90’s generation, her collection Seven Years was published in 2012. She currently lives in Chengdu.

Colin Herd is a poet, fiction writer and critic. American novelist Dennis Cooper said he was ‘is a treasure trove of razzle-dazzle stylings, superfine wit, charismatic discretion, and a vacuuming tenderness. Herd’s gift for words is exquisite and adventurous and armed to the teeth, and these poems are its perfect measurements.’ His first collection of poems too ok was published by BlazeVOX in 2011. Click & Collect is new in 2017 from Boiler House Press, and Swamp Kiss from Red Ceilings Press in 2018. He has published over 60 reviews and articles on art and literature in publications including Aesthetica Magazine, 3:AM Magazine, PN:Review and The Independent.

In partnership with the Scottish Universities’ International Summer School.