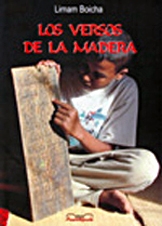 All four poets belong to the Generación de la Amistad [Friendship Generation], a dynamic group of writers who are dedicated to raising awareness of the Saharawis’ plight. A former Spanish colony, the Western Sahara was invaded by Morocco in 1975 displacing more than half the population to refugee camps in south-west Algeria where 200,000 Saharawis still live. The native Saharawis who have remained in occupied Western Sahara are now outnumbered by Moroccan settlers and a huge presence of army and security forces. They are separated from the rest of their people by a 2,500km long wall built by the Moroccan government, which has deliberately suppressed their culture and violated their human rights in an attempt to ‘Moroccanize’ the territory. A UN referendum giving the Saharawis a chance to vote on their right to self-determination was planned for 1992 but it has yet to take place.

Poetry has always played an important role in this traditionally nomadic society, which grew from Berber, African and Arab-Islamic roots. The Saharawis speak Hassaniya an unwritten Arabic dialect, but the Generación de la Amistad write in Spanish first learnt in primary school as a second language then reinforced for many when they were sponsored to study abroad in countries such as Cuba. Their travels have introduced them to new influences - to writers such as Federico García Lorca, Rafael Alberti, Miguel Hernández, Pablo Neruda, Mario Benedetti and Eduardo Galeano. The strongly imagistic tendency of the Spanish and Latin American vanguardia [avant-garde] is evident in poems that avoid the bombast of poesía comprometida [committed poetry] for a much quieter and subtler vision. Remembered glimpses of a harsh Saharan life are often juxtaposed with the unsettling environments of the exile. This form which eschews comment is particularly effective for an expression of yearning, loss and disorientation, but also for fascination and enchantment. As Limam Boicha declares in his playful ‘Poligamia’ [Polygamy]: ‘Tengo tres… / tres amantes: / Sáhara Cuba y Canarias; / y a las tres / las quiero por igual’ [I have three... / three lovers: / the Sahara, Cuba and the Canary Islands; / and I love all three of them / equally].

There have been two recent anthologies of Saharawi poetry published in Spanish: Añoranza [Longing] and Bubisher (2003). A bi-lingual anthology in Spanish and English, Treinta y uno/Thirty one, was published by Sandblast and Ediciones Sombrerete in 2007. For more information on the Saharawi people, you can visit the Sandblast website on the link below.