Diana Anphimiadi’s poetry navigates the heartache and absurdity of love, and offers profound reflections on the limits and possibilities of language itself. See her live on tour.

'This is gorgeous, fabulising verse'

Diana Anphimiadi’s book Why I No Longer Write Poems is the first full-length selection in English from one of Georgia’s most acclaimed poets. Her poems range from the contemporary thrum of a train carriage to the ancient grievance of Greek myth, navigating the heartache and absurdity of love, and offering profound reflections on the limits and possibilities of language itself. The book has been collaboratively translated from the Georgian by translator Natalia Bukia-Peters and poet Jean Sprackland.

To celebrate the publication of Why I No Longer Write Poems Anphimiadi is coming to the UK for a tour. She will be appearing with Argentine poet Diana Bellessi at StAnza Poetry Festival, appearing at both Pushkin House in London and at the Manchester Poetry Library with her trasnlaors.

Diana Anphimiadi is a poet, publicist, linguist and teacher. Currently a doctoral student at the linguistic institute at the Tbilisi Javahkishvili University, Diana has published four collections of poetry, Shokoladi (Chocolate 2008), Konspecturi Mitologia (Resumé of Mythology, 2009), Alhlokhedvis Traektoria (Trajectory of the Short-Sighted, 2012 and Chrdilis Amoch’ra (Cutting the Shadow, 2015). Her poetry has received prestigious awards, including first prize in the 2008 Tsero (Crane Award) and, in 2009, the Saba Prize for the best first collection.

Natalia Bukia-Peters is a freelance translator, interpreter and teacher of Georgian and Russian. She studied at Tbilisi State, Ilia Chavchavadze University and holds a Masters degree from Leiden University, the Netherlands. She has been a translator for the Poetry Translation Centre and a member of the Chartered Institute of Linguists in London for several years.

Jean Sprackland's most recent collection, Sleeping Keys, was published in 2013, and Tilt won the Costa Poetry Award in 2007. She is also author of Strands, the winner of the Portico Prize for Non Fiction. Jean is Professor of Creative Writing at Manchester Metropolitan University, and Chair of the Poetry Archive.

Diana Anphimiadi ‘Why I No Longer Write Poems’ London Event 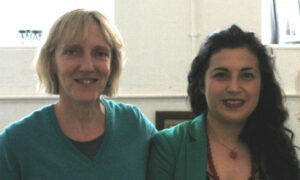 ‘Why I No Longer Write Poems’ launch in Bristol