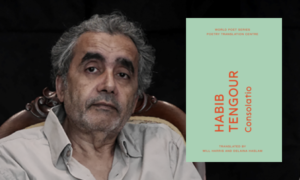 Habib Tengour is one of the most visionary voices of post-colonial Algeria. He will be on tour visiting Leeds, Ledbury and London with his translators Will Harris and Delaina Haslam in July.

Habib Tengour is one of the most visionary voices of post-colonial Algeria. Now, for the first time poems from Tengour’s collection Consolatio, have been selected and translated into English by Will Harris and Delaina Haslam as part of the World Poet Series funded by Creative Europe.

Consolatio focuses on the feeling of loss that exile brings, which Tengour expresses through a series of playful poem-puzzles and longer prose poems. Will Harris and Delaina Haslam’s translation is rich and varied, capturing the multiple shadows behind Tengour’s French and rendering them into an English which envelopes and cradles their complexity.

Habib Tengour, is a celebrated poet, sociologist and anthropologist. After spending the early part of his childhood in Mostaganem, Algeria he then moved to France where his parents fled for political reasons. This mix of cultures in his early life is reflected in his poetry which remains strongly rooted in the Algerian culture and tradition, yet he chooses to write in French to express his experience of exile. He is influenced by the giants of Western literature such as James Joyce and the pre-Islamic poetry, Mu’allaka, and classical epic lyrical poems.

Since his initial departure as a child, Habib Tengour has lived the majority of his life between France and Algeria. He returned in 1972 to carry out his military service and then to teach at the University of Constantine, where he has been a professor of sociology and anthropology. He now spends roughly half of the year in each country. He is the author of over fifteen books of poetry, essays, and drama, and his work has been translated into several languages, among them English, German, Italian, and Arabic. His work includes “Exile is my Trade”: The Habib Tengour Reader, edited and translated by Pierre Joris, and Crossings, translated by Marilyn Hacker. With Pierre Joris, he edited Poems for the Millennium, Volume Four: The University of California Book of North African Literature.

Will Harris is an Anglo-Indonesian writer, born and based in London. An Assistant Editor at The Rialto and fellow of The Complete Works III, his work is featured in the Bloodaxe anthology Ten: Poets of the New Generation. He is the author of the chapbook of poems, All This is Implied (HappenStance, 2017) and Mixed-Race Superman (Peninsula Press, 2018), an essay. ‘SAY’ was shortlisted for the Forward Prize for Best Single Poem 2018.

After studying English, French, and journalism, Delaina Haslam worked in writing and editing roles in Madrid and then London. Missing languages, she retrained and passed the Diploma in Translation. She specialises in sociology and translates for French academic journals. She took part in the British Centre for Literary Translation Summer School in 2016, which led to invaluable collaborations including a series of Poetry Translation Centre workshops on francophone African poets and participation in Newcastle University's Poettrio Experiment. She translated a story by Guatemala's Alan Mills (from Spanish) for the Hay Festival Bogatá 39 anthology, but this collection is her first full literary work. She’s interested in collaborative and performative translation, and has written for the Glasgow Review of Books, the Poetry Translation Centre, and Yorkshire Translators and Interpreters. She is also working on a creative nonfiction novel. She lives in Sheffield with her partner and son.

More events in the Leeds Library on July 1st and with Exiled Writer Ink in London on 4th July to be announced. 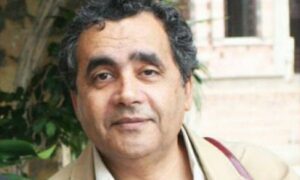 Habib Tengour, Delaina Haslam & Will Harris at The Leeds Library

Price - Pay What You Feel 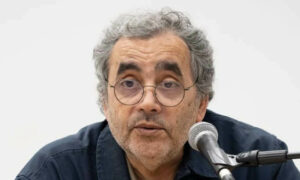 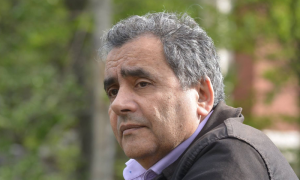 Poet Habib Tengour from Algeria plus Other Exiles - London 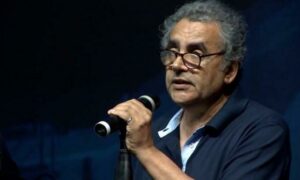