As the world seems to quake with crisis and division we look to poetry and transition to open up windows of understanding and connection.

Our next online season of poetry translation workshops, led by poet Kostya Tsolakis, will take place in February and March 2023.

We will be catching up with four translators from across the world and looking at poetry in four different languages, Portuguese, Turkish, Farsi and Arabic, emerging from four very different contexts in Brazil, Turkey, Iran and Western Sahara. Each workshop will be an opportunity to dig into a linguistic puzzle and discover the lived culture behind the headlines.

There is no need to know the languages we are translating. Simply come along and be part of the translation process.

At each workshop, we will meet online via Zoom with a guest translator who will bring an intimate knowledge of the language being translated. They will introduce us to a poet’s work, and provide us with a rough translation to work with along with all the context and cultural insight needed to make a sensitive translation. The workshops will be led by the poet Kostya Tsolakis, himself a veteran of our translation workshops. He will guide the discussion and help the group shape the translation into a living poem, once that sings in English while remaining faithful to the original poem.

Translator and editor Francisco Vilhena returns to work on i-juca piranha by Brazilian writer and activist Érica Zíngano. This long and witty poem takes bites out of history and language, linking language lessons with the violent colonisation of Brazil. This is a serious, political and incisive poem, delivered in play speaking and musical lines of verse. It has been described as having a ‘cigarette-in-the-hand-kind-of-story-telling’ and translator Vilhena will be keen to hold onto the original poem’s rhythms and ironic changes in tone as we bring the text into English.

The Poetry Translation Centre first worked with Karin Karakaşlı in 2017 when we published a chapbook of her poems translated by Canan Marasligil with Sarah Howe and she came over to tour the UK. As well as poetry Karakaşlı has written a children’s novel, books of short stories and worked as a translator as well as a newspaper editor and columnist for the Turkish-Armenian weekly newspaper Agos. We will be working again with multilingual & intersectional feminist writer, artist, and literary translator Canan Marasligil to translate new poetry by this Armenian Turkish poet.

Poetry is an important part of daily life in Iran and the PTC has a long history of translating poetry from the country, including more than a decade’s worth of workshops with poet and literary translator Alireza Abiz and publishing Negative of a Group Photograph, a full-collection by poet Azita Ghahreman. At this workshop, we will focus on a new Farsi language poet discovered by translator and film producer Elhum Shakerifar, who translated Ghahreman with the poet Maura Dooley. We will announce more details including the poet's name and details closers to the date of this workshop.

In the final workshop of this online season, we will be translating the work of Zaim Allal a famous Saharawi poet who is living in the refugees camp in Algeria. The guest translator for these sessions will be Hamza Lakhal. Allal’s poetry is composed in Hassaniya, a variety of Arabic found in many African countries that is not mutually intelligible with other varieties of Arabic but is recognised as a language of national identity in Mauritania. The Saharawi people have a highly mixed heritage, combining Arab, Berber and other North African tribal elements.

Kostya Tsolakis is a London-based poet and journalist, born and raised in Athens, Greece. A Warwick Writing Programme graduate, he is a founding editor of harana poetry, the online magazine for poets writing in English as a second or parallel language, and in 2020-21 was co-poetry editor at Ambit. His debut poetry pamphlet Ephebos is out with ignition press. In 2019, he won the Oxford Brookes International Poetry Competition, ESL category, judged by Jackie Kay. His poems have appeared, among others, in Stand, Magma, The Tangerine, perverse and Wasafiri. He is a member of Malika’s Poetry Kitchen. His first full-length collection of poetry, Greekling, will be published in October 2023 by Nine Arches Press.

You can get tickets for individual workshops or save money by signing up for a Season Pass.

Get a Season Pass For All Four Sessions Here 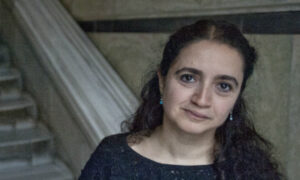