The Politics of Translation 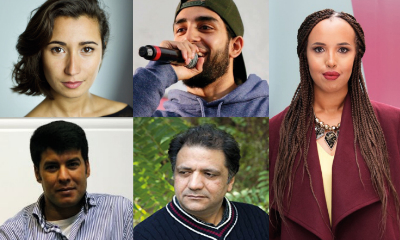 A Discussion of the Politics of Translation, with Spoken Word Performances

Could English translation ever be considered evil? Possibly a necessary evil? Or is it simply part of transmitting culture in contemporary times? How useful is translation for diaspora communities?

The Poetry Translation Centre alongside the DEN (Democratic Education Network) and the DPIR (Department of Politics and International Relations) present a panel discussion at the University of Westminster on ‘The Politics of Translation’, where we will be discussing what translation means in contemporary times. This exciting event will allow us to have a varied debate on literary translation by acknowledging that the act of translation happens in a political realm.

We are also very pleased to have spoken word performances from two fast-rising poets, Usaama Minhas and Marika McKennell.

Hanna Ali is writer, a poet, a Teaching Fellow and a PhD candidate in SOAS, University of London where she specialises in Afro-Arab identity and how migrant writers in Britain negotiate questions of home and (un)belonging. Hanna is a former radio presenter who speaks 4 languages and has lived in 6 countries. She was recently featured in BuzzFeed’s “21 Black British Muslims You Should Know About”.

Atef Alshaer is lecturer in Arabic Studies at the University of Westminster. He first came to London after completing his Bachelor degree in English Language and Literature at the University of Birzeit in Palestine. Alshaer has written several research papers and monographs, including his book, Poetry and Politics in the Modern Arab World.

Marika Mckennell is an actress, playwright, spoken word poet, and an artist in residence at the Roundhouse, London. She also works as a teacher in a pupil referral unit in Hackney. Her work is politically fueled, informed and inspired by her mixed heritage and involvement in Hip Hop Education.

Usaama Minhas started writing in his teens and later spent a year in New York on an actor training conservatory for Theatre, Film and TV. In New York, Usaama started performing at the Nuyorican Poets Cafe and the Pyramid Club. On returning to the UK, Usaama won the 'Britain's Got Bars' Rap Battle Tournament at French Montana’s show at the indigo at The O2, sharing the stage with Lady Leshurr and Ghetts.