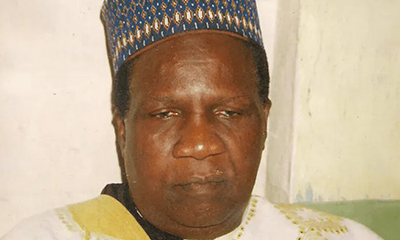 Alhaji Mudi Sipikin was a poet and a founding member of the progressive independent party, Northern Elements Peoples Union (NEPU) in 1950. Popularly known as Mudi Sipikin, he got the surname from the habit, when he was a clerk to the NEPU progressives party, of answering phonecalls with "This is Mudi sipikin". His poem will be translated under the guidance of Richard Ali.

The Poetry Translation Centre is very proud to partner with the Aké Arts and Books Festival to present a special series of translation workshops on the Nigerian languages of Yoruba, Igbo and Hausa.

Book places for all three sessions, find out more here.

Join like-minded poetry lovers from across the world to discover new poetry and different cultures, share insights and language skills, working together to open up a poem in its original language and reassemble it in English. The result will be new group translations of contemporary Nigerian poems. This session on Hausa will look at a poem by Mudi Sipikin.

To help in this task you will be guided by the translator Richard Ali who is an expert in the language, and the professional poet Chrissy Williams. They will offer insight into the nuances of the language and culture, and give helpful suggestions for the direction of the translation that is produced.

Taking place online via Google Meet, the workshops are the perfect way to keep yourself feeling creative, engaged and connected to the world at large. A rough and ready guide translation is provided by the guest translator so there is no need to know the language being translated - simply sign up and bring your love of poetry and language.

Alhaji Mudi Sipikin was born and lived in Kano State in Northern Nigeria, but he had a wide knowledge of politics and travelled the world. He was educated and obtained GCE certificates via correspondence with a school in London. His first poem, published in 1946 when he was 18, showed concern with the welfare of the poor. As a political activist, Mudi worked for independence from colonial rule, for which he was imprisoned several times, and once achieved championed education and religious tolerance in Nigeria. He was the founding father of the Hikima Club, an association of poets writing in Hausa. A popular poet who covered all aspects of life, he often read at public occasions right up until his death in 2013.

Richard Ali is a Nigerian lawyer, novelist and poet. A founding member of the Nairobi-based writers’ collective, Jalada Africa, he helped work on the Translations 01 project which saw a short story by Ngugi wa Thiongo translated into 100+ languages. He has spoken publicly about Arabic as a language bridge between the middle east and Africa and in 2020, he translated one of the maqamats of al-Hariri of Basra (d. 1122) to Naija Langwej as part of Professor Michael Cooperson’s new book of translations—Impostures (NYU Press). He read from this translation at a seminar at Princeton in August. His novel, City of Memories (Parrésia Books) was published in 2012 and the poetry collection, The Anguish and Vigilance of Things was published by Konya Shamsrumi in 2019. He works in internal security, particularly in preventing and countering violent extremism (PCVE), and practices corporate law in Abuja, Nigeria.