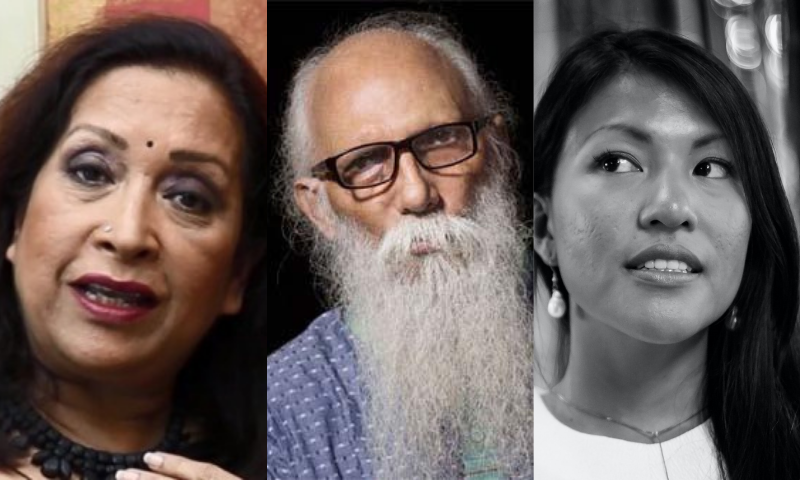 For the eighth and final workshop in our ‘Translating Lewisham’ series, we will be looking at poems by Bangladeshi poet Nirmalendu Goon with returning guest translator Shamim Azad. Part of the generation of poets who came to prominence in the 1960s, Nirmalendu Goon's passionate poetry contains stinging criticism of the nouveau riche and a call to arms for the poor majority. Poet April Yee will be facilitating.

Nirmalendu Goon is one of the most popular Bangladeshi poets, known for his accessible verse. His first book of poetry was published in 1970. Since then he has published forty-five collections of poetry and twenty collections of prose. An avowed Marxist, Goon has also written poems urging an upheaval of the poor against the rich. He also has written a number of poems on important personalities, including Rabindranath, Sheikh Mujib, Lenin, Shakti Chattopadhyay and others.

Shamim Azad is a British bilingual poet, storyteller and writer of Bangladeshi origin. Her work ranges from Bangladeshi to European folktales. Her performance fuses the lines between education and entertainment and her workshops are rooted in Asian folk, oral traditions and heritage. She has published books including novels, collections of short stories, essays and poems in both English and Bengali and has been included in various anthologies including British South Asian Poetry, My Birth Was Not In Vain, Velocity, Emlit Project and Mother Tongues. She has written two plays for Half Moon Theatre. She is a trustee of charity One World Action, a school Governor and Chairperson of Bishwa Sahitya Kendra (World Literature Centre) London.

April Yee is a National Book Critics Circle Emerging Critics Fellow, editor-in-residence at The Georgia Review, and the University of East Anglia’s Malcolm Bradbury Memorial Scholar. A Harvard and Tin House alumna, she reported in more than a dozen countries before moving to the UK, where she reads for Liminal Transit Review and mentors for University of the Arts London’s Refugee Journalism Project. In 2021, she was the winner of the Mendocino Coast Writers’ Conference Contest in nonfiction and shortlisted for the Fitzcarraldo Essay Prize, the Women’s Prize Trust’s Discoveries, and the Alpine Fellowship Writing Prize. She tweets at @aprilyee.