Workshop on Mostafa Ibrahim from Egypt with Nariman Youssef 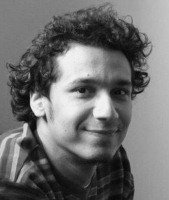 Due to the tube strike, very reluctantly we had to postpone our workshop on the poetry of Mostafa Ibrahim, a young Egyptian poet who shot to fame during the 'Arab Spring' that began on 25th January 2011, so this rescheduled workshop was eagerly anticipated.

Following discussion with Mostafa's translator, Nariman Youssef, we decided not to try to translate Mostafa Ibrahim's famous poem, 'Manifesto', that was written in response to the 'Arab Spring' in 2011; composed in Egyptian dialect, 'Manifesto' is a polemical and powerful call to arms that inevitably would seem clumsy in English translation.

Instead we translated one of his lyric poems, 'Balloons', that was published in Mostafa's first collection of poems, Western Union, Haram.