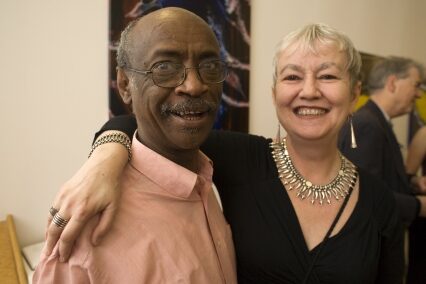 At an evening of international poetry last Tuesday to mark the official launch of the Poetry Translation Center at the School of Oriental and African Studies (SOAS), London University, there were readings in English translation of poems by nine poets from eight non-European countries - Sudan, Mexico, Ethiopia, South Korea, Mozambique, India, Peru and Somaliland.The translations were produced by the poetry translation workshop the British poet Sarah Maguire set up at SOAS in 2002. Thanks to a grant of £65,000 from the Arts Council, London, the workshop has developed into the Poetry Translation Center of which Maguire is founder and director.

Maguire says the Poetry Translation Center is an extremely exciting development for poetry in Britain both for poetry written in English and especially for the astonishingly rich and diverse poetic traditions vital to the many communities now established here."

She adds: "Very little poetry has been translated from non-European languages into English and that which does exist is often of an extremely low standard indeed." So far her workshop has translated poems into English from 16 languages including Japanese, Turkish, Bengali, Sylheti, Farsi, Urdu, Portuguese and Chinese.

Members of the workshop bring their literal translations of poems to the workshop and they and their colleagues rework them through what Maguire describes as "a process of negotiation".

During the evening the poems were read in their original languages by their literal translators and the final English translations were then read by four outstanding British poets - Michael Donaghy, Katherine Pierpoint, David Harsent and Ruth Padel. The high quality of the translations bodes well for the new center.

Before the launch Maguire and the Sudanese writer translator and filmmaker Hafiz Kheir were invited onto the BBC Radio 3 weekly program The Verb to talk about the center. Kheir read in Arabic the Sudanese poet Al-Saddiq Al-Raddi s poem 'Breathless' and Maguire read the English translation.

Al-Saddiq Al-Raddi who was born in 1969 and grew up in Omdurman has had three poetry collections published. At the SOAS evening Kheir read two Al-Raddi poems 'A Monkey at the Window' and 'Song'.

The poem 'Longing' by the Ethiopian Mengistu Lemma was read in Amharic by Martin Orwin and in English by David Harsent. There was also poetry by the Hargeisa-born Somali poet Maxamed Xaashi Dhamac 'Gaarriye'.

The sensuous poem 'Water of Jellyfish' by the Mexican poet Coral Bracho was beautifully read in Spanish by Tom Boll and in English by Katherine Pierpoint. The other poets whose work was read were Ch'oe Young-mi of South Korea, Eduardo White of Mozambique, Blanca Varela from Peru and two Indians - Gagan Gill who writes in Hindi and Suresh Dalal who writes in Gujarati.

The readings were followed by a recital by the excellent Iraqi oud player Ahmed Mukhtar. To conclude the evening Maguire introduced the center's patron the renowned Iraqi poet and translator Saadi Youssef.

Maguire says there are two main reasons why she has long hoped to set up a poetry translation project. "One is that the British poetry establishment is rather limited in its outlook and in its inclusiveness at the moment. And the other is that poetry only ever thrives on translation from other languages into English."

She cites the influence the Penguin Modern European Poets series published in the 1960s and 1970s has had on her generation of poets. She hopes that the Poetry Translation Centre will do something similar for non-European poetry.