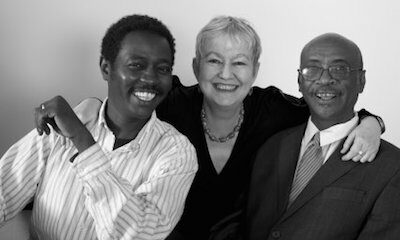 Could there be an audience in Bristol eager to hear poetry from Somaliland and Sudan on a Sunday afternoon? Having spent most of the day before on a slow train paddling down from Newcastle and worrying about a missing notebook, it was something of a relief to fret about an audience instead. Would it extend to two men and a hungover dog? Could we in fact request a dog-only audience? Would Sarah arrive safely through the flood waters? Would she bring the vital CDs of Gaarriye and Al-Saddiq Al-Raddi and would they be playable? Would the dog's hangover make it pliable? So many alarming issues to settle in the time it takes to down four espressos.

Fortunately the Bristol Festival is run by the deeply knowledgeable, highly capable and endlessly enthusiastic Colin Brown, who asserted that we would have an ample and informed audience -- and was not proven wrong. No sooner had I been greeted than Sarah arrived (well before the nick of time needed to be nocked), the excellent venue took sound checks in its gaunt, bobbly-hatted stride, and there we were, launching the Poetry Translation Centre's World Poets Tour with our newly-delivered pamphlets clutched in excited hands.

Sarah spelt out how that special combination of dream ticket and logistical nightmare which is the Tour came into being, from its seeds in SOAS to the independent juggernaut about to roll through major festivals nationwide. She emphasised how important it is that we engage with the poetry of nations which the media and indeed government present to us as Nowheres Special or even no go zones, and how transformative it has proven for all our imaginations. Then, explaining that Somali makes Arabic look like Esperanto, she asked me about how I translated one of the finest and most significant writers in that tongue, Maxamed Xaashi Dhamac, or Gaarriye.

How do you convey the particular mixture of privilege and thrill which working on a gifted poet gives you? Especially when the language is as distant-seeming as Somali, and your key co-conspirator, the fluent expert Martin Orwin, is somewhere east of Aleppo? What about the fact that Somali is still principally an oral poetry, tested on the ear and transmitted more by cassettes than books; that the Somalis are poetry mad and Gaarriye is a star and public figure (with all the difficulties of responsibility versus independence that entails) on a scale Mayakovsky would have envied?

What about the fact in the early 70s that he sat on the committee that regulated which script Somali would be written in? That he wrote influentially on the complex metres and alliterative framework Somali poetry is built from? That he did all this at the same time as writing the two poems I read, the ars poetica 'Uurkubbaale' (Seer) and the compressed Prelude 'Garaad-Daran' (Self-misunderstood)? How do you do justice to a poet living through and contributing to a moment of the same order of cultural importance as the Romantic period is to us?

Ah well, as Sarah explained about the work of Al-Saddiq Al-Raddi, the Sudanese poet who'd survived imprisonment and evaded censorship through his courage and his brilliant and complex use of imagery, no-one said translation would be easy. In fact, translating Arabic, a language so ontologically and epistemologically distinct from English is, she remarked, like pouring water through a sieve: only droplets remain. Brilliant, fascinating droplets, like the crowns of ancient kings made out of 'shards of skeletons/fishheads/unpronounceable words' but droplets nonetheless.

She emphasised that, thanks to the previous tour, Al-Saddiq was producing an entire book about his experiences, that it had introduced a shift in direction for his work: proof that, by attending these readings, by buying these works, we don't merely peer through the lens of translation, we contribute towards change -- hopefully positively.

Which is why it was all the more delightful to be so warmly appreciated and carefully questioned. How did you pair up the poets? Like a matchmaker, as Sarah explained, it's a passionate arrangement. How do you avoid producing versions rather than translations? Well, in the titanic contest between the task and one's ego, some don't. How do
you translate from a language you don't know? The real translator must come in, like a marriage counsellor, negotiating line by line between original and target languages, original and secondary imaginations.

Translation is like poetry for vampires: your whole excitement is in the encounter with the strange sound-world, the syntax, the extraordinary imagery, the complex cultural references, of the other -- and yet the task is to find some deep connection with your own writing, your own world: to seek out the familiar in others, the exotic in yourself. I was astounded to discover Somali poetry, with its long, intricate, improvisatory, alliterative riffs, was so direct in its address, so dazzling in its metaphysical subtlety. With Gaarriye as my introduction, I began to imagine a nation of Ginsbergs, Kerouacs howling and hymning, psalms for the sorted, suras for all sorts. Astounding -- but then you come into this business to be astounded.

So, apparently, did the audience, who crowded around Sarah at the end, full of praises and waving fivers to snap up the first pressings of what promises to be a very good year for poetry in translation.