Part of: World Poets’ Tour 2008 Corsino Fortes at The Camoes Institute in Oxford 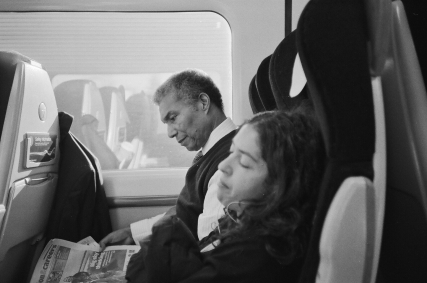 The event, conducted in one of the college seminar rooms, attracted an enthusiastic audience of over twenty under- and post-graduate students and staff from across the department. For every fluent-Portuguese speaker (and national) familiar with both Cape Verde's history and Corsino's verse, there was a first-term student only just beginning their study of the language and the Lusophone world. This mix led to a lively and largely informal academic event. Corsino's readings and expositions, simultaneously translated by Yasmina and Luisa, were followed by a series of questions from around the table with animated discussions ensuing in Portuguese and English.  The legacy of colonialism and the Portuguese language in Cape Verde and the issue of politics and verse - and, in particular, the difference between poetry and mere polemic - were among the topics that engaged this predominantly young audience, and that Corsino covered in some detail.

Touched by the intelligent responses to his work, Corsino was especially delighted at the end of the evening to be presented with a new collection of Lusophone African poetry in translation. The volume he was given, Charrua and Beyond / Para Alem De Charrua: The Poetry of Independent Mozambique, is published by Coventry's Heaventree Press - another recipient of Arts Council funding.