Part of: World Poets’ Tour 2008 Gaarriye and W N Herbert at the Bluecoat Centre in Liverpool 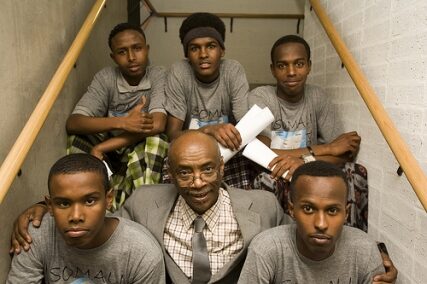 This was one of the key community events that we organised for the tour. Charles Beckett has written a blog about our events in Liverpool.

We wanted to make sure that the Somalicommunity would come to Gaarriye's reading at the Bluecoat centre in Liverpool - not somewhere they'd visit ordinarily. In order do this, we made contact with members of the community and people who worked with them, and we carried out an extensive amount of research that started months beforehand.

Our focus was on the refugee community centred in Toxteth, and in particular, boys from the Shorefields School and their families. ‘Liverpool Reads', a project of the organisation ‘The Reader' based in Liverpool, hired a literature worker - Hamida Yusufzai - to run poetry workshops with a group of eight boys from the school. We coordinated closely with the group, enabling them to have a chance to read some of Gaarriye's poetry before his visit, as well as discussing the importance of his poetry with their parents and other people in the community.

In addition to this development work, we ran focus groups with members of the Somali community in Liverpool at the Kuumba Imani Centre in Toxteth. The Centre was developed with money from the ‘Lottery Awards for All' scheme and is now a frequently-used venue for the community.

During the focus group sessions, we asked questions about how the community got to know about events; what the most successful methods of advertising and promoting to local Somalis was; and what barriers people felt there were to attending arts events at venues in the city centre. Perhaps surprisingly, cost, travel and a feeling of being intimidated by the venue's atmosphere or typical audience did not feature in responses. People were quite happy and confident about going to events at the Bluecoat, for example, but they felt events were rarely programmed that appealed directly to them. One particularly crucial factor was that the whole Somali community needed to be informed about and invited to events, as stigma was attached to attending events outside the community group.

It was made clear to us that events should be: family-friendly; take place at the right time of day (evenings); and be well promoted among the Somali community. Another potential barrier to attending events was the booking system, which many Somalis do not like. Tickets should be available on the door, or if possible redeemable vouchers should be distributed and sold in the community before events.

We also worked very closely with the Bluecoat's literary events' director - Maura Kennedy - who was flexible about ticketing, and who helped to promote the event widely in Liverpool. She met with the Somali contacts that we provided, and attended workshop sessions with the boys from Shorefields. She also arranged, with Hamida, for the boys to attend several events at the Bluecoat and helped out with arrangements for their programme. This support and familiarity with the venue undoubtedly helped the boys develop a sense of confidence and enthusiasm, and ultimately led to them promoting the event themselves very effectively.

Events at the Bluecoat Centre

On the afternoon of 14th October, Gaarriye, PTC Community Officer, Charles Beckett and our photographer, Crispin Hughes, travelled to Liverpool for the World Poets' Tour events. The boys from Shorefields School performed their own poems at 5.30 pm and launched a booklet containing their work. There was a good audience (around 40 people) for their reading, predominantly young Somalis who were school friends of the boys.

Gaarriye gave a speech saying how proud he was to see the boys writing such strong poetry and encouraged them to continue. Afterwards there was a short interval in which the boys posed for photos with Gaarriye and asked him about his work. It's difficult for non-Somali audiences to grasp exactly how famous Gaarriye is in Somali circles: something akin to a rock star in the west would be getting close. Which meant this was a hugely prestigious and exciting encounter for all the Somalis who came to the Bluecoat - the boys in particular.

Shortly after this, Bill Herbert arrived from Newcastle for his first reading with Gaarriye. Suffice it to say that this initial encounter was an overwhelming success. A immediate, strong bond was formed between the two poets, thanks in no small part to Bill's fascination with the fine details and structure of Somali poetry. They both read superbly, thrilling everyone who had the privilege to hear them.

For the main reading the audience grew to around 50 people, with approximately half being Somali, this time from the older generation. It was clear from the make-up of the audience and the enthusiasm of those attending the event that the audience development work we did in conjunction with Maura and Hamida at the Bluecoat, and the community ambassador work the boys had done was very successful.