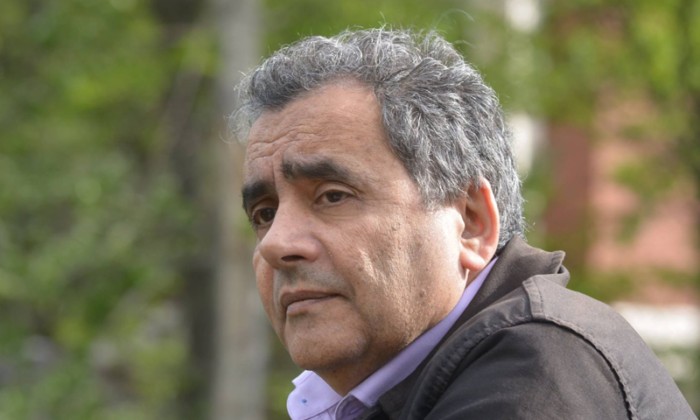 Habib Tengour, the poet, sociologist and anthropologist is one of the most visionary voices of post-colonial Algeria. His poetry is steeped in the imaginative and cultural geography of the Maghreb: exile and dislocation only serving to heighten its musical registers.

Born in 1947 in Mostaganem, poet and anthropologist Habib Tengour has published more than fifteen books of poetry, prose, plays and essays. His work is published in both Algeria and France, and has appeared in many journals, including Action Poétique, Po&sie, La traductière, and Bacchanales. He is translated into German, English, Arabic, Italian, Macedonian and Dutch.

In June 2016, he was awarded the Dante European Poetry Prize for his entire poetic work. He is the editor of Poems of the World, published by APIC, in Algiers, a seven-book collection, the first of which appeared in 2018.

Habib will be joined by his translators Will Harris and Delaina Haslam. Will Harris is a London-based writer and editor. His debut poetry book RENDANG (2020) was a Poetry Book Society Choice, shortlisted for the T.S. Eliot Prize and won the Forward Prize for Best First Collection. His second book of poems, Brother Poem, will be published by Granta in 2023.

Delaina Haslam specialises in sociology, translating for French academic journals. She took part in the British Centre for Literary Translation Summer School in 2016, which led to invaluable collaborations including a series of Poetry Translation Centre workshops on francophone African poets and participation in Newcastle University's Poettrio Experiment. She translated a story by Guatemala's Alan Mills (from Spanish) for the Hay Festival Bogatá 39 anthology.

After the coffee break, the audience will hear from Taffi Nyawanza, a Zimbabwean writer and human rights lawyer. His short fiction has appeared in Afritondo, The Voice: Untitled Anthology, The National Flash Fiction Journal, Kreaxxxion Review, PerHappened Mag and Lumiere. Taffi's full collection was shortlisted for The St Lawrence Book Award 2020 and Scatterlings was nominated for Best of the Net 2020 by National Flash Flood. His pamphlet is The Men who Have No Knees (Exiled Writers Ink, 2021).

Reading alongside Taffi will be Ziba Karbassi. Born in Tabriz, north-western Iran, she has published ten books of poetry in Persian and two books
in English and Italian, and is widely regarded as the most accomplished
Persian poet of her generation. She has read widely across Europe and America. Her poems have appeared in many languages throughout Europe, the UK and US. Her poetry has been translated into more than ten languages. Translations by Stephen Watts have appeared in such journals as Poetry Review and Modern Poetry in Translation. In 2012, she was chosen by the Contemporary Poetics Research Centre (CPRC) at Birkbeck, University of London, as a revolutionary world poet.