Join us online for readings, talks and a children’s storytelling event celebrating the publication of Aulò! Aulò! Aulò! by poet, writer and refugee-rights activist Ribka Sibhata.

Ribka Sibhatu is an Eritrean poet whose work deals with the pressing matters of our times. Her recent work has blurred the line between poetry and direct political action. Whether it is her activist poems discussing migrant experience in Europe or her personal lyric poems, her passion is infectious and captivating. We will also be celebrating her ongoing efforts to collect and record the oral folklore and myths of Tigrinya tradition. Ribka will be joined across the tour by poet, critic and editor André Naffis-Sahely who has worked with her for ten years, translating her work.

Our Ribka Sibhatu Tour will take place fully online, with chances to see Ribka and her translator André Naffis-Sahely read her poems, discuss the wider political issues and get into the city gritty of the translation process. The tour will have a mix of free and paid events hosted by our parters, with readings on YouTube, in conversation video events, opportunities to meet the creative team on Zoom, and even a children’s storytelling hour.

This tour celebrates the publication of Aulò! Aulò! Aulò! which features both Ribka’s early taboo-busting lyric poems as well as her longer politically tinged narrative poems. These are presented alongside her retelling of traditional oral African fables. The book contains text in Tigrinya, Ahmaric and Italian, the three languages that Ribka writes in, side by side with Naffis-Sahely’s English translations. Aulò! Aulò! Aulò! is the 25th book in the PTC’s World Poet Series, edited by our Commissioning Editor Edward Doegar. Order your copy today.

Ribka Sibhatu is a poet, writer and refugee-rights activist. She was born in 1962 in Asmara. At seventeen she was imprisoned for refusing to marry an Ethiopian military officer. Self-exiled from Eritrea since 1982, she has lived in Ethiopia, France and Italy. She has worked as a court interpreter in Rome.

Her much-admired book of poems, Aulò! Canto poesia dall’Eritrea (Sinnos), was published in 1993 and revised and expanded in 2009. In 2011 she published a bilingual edition of Tigrinya folklore, Il numero esatto delle stelle (Sinnos). Her life, told through the experience of her migration, was the subject of the 2012 documentary Aulò: Roma postcoloniale.

Her work has been anthologized internationally, most notably in The World Record: International voices from Southbank Centre’s Poetry Parnassus (Bloodaxe, 2012) and The Heart of a Stranger: An Anthology of Exile Literature (Pushkin Press, 2020).

André Naffis-Sahely (born 1985) is a poet, translator, critic and editor. He is from Abu Dhabi, but was born in Venice to an Iranian father and an Italian mother. Naffis-Sahely has worked with Ribka Sibhatu for over ten years and his dedication to her work has lead directly to the publication of Aulò! Aulò! Aulò!

Naffis-Sahely is the author of The Promised Land: Poems from Itinerant Life (Penguin UK, 2017), which was described by Pankaj Mishra in The Guardian as a series of "sharp meditations on our vast but remarkably homogeneous global landscape." He is currently a Visiting Teaching Fellow at Manchester Metropolitan University writing school and is the poetry and reviews editor of Ambit magazine.

We would like to thank our partners The Ledbury Poetry Festival, English PEN, The Manchester Poetry Library, University of Glasgow and Norfolk Libraries. 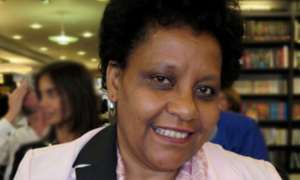 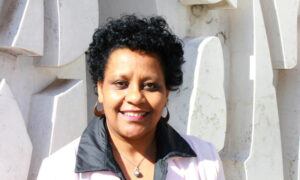 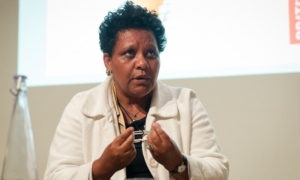 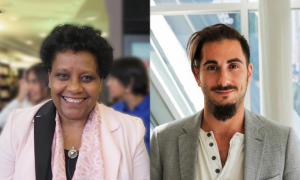 An Intimate Audience Online with Ribka Sibhatu and André Naffis-Sahely